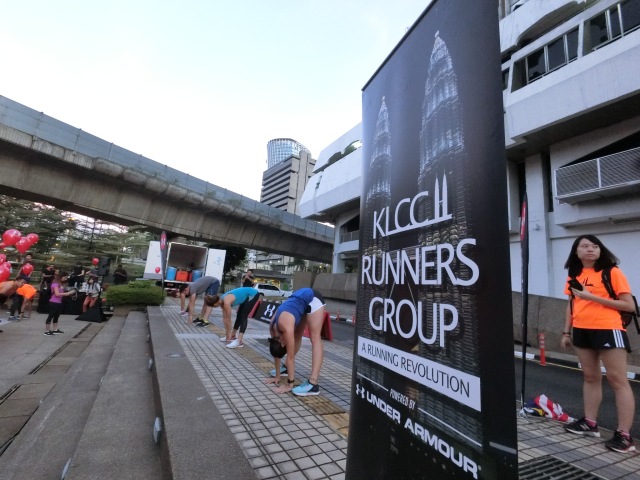 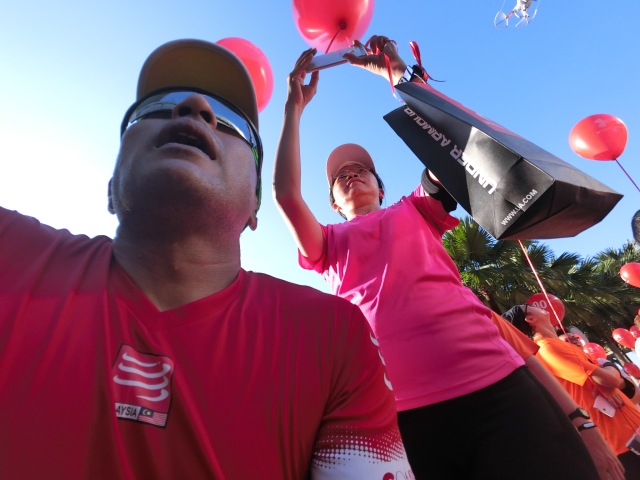 What captured my attention initially about this new running group was their refreshing outlook on running which is to vigorously encourage their members to lead a healthy lifestyle through various weekly workouts such as running and yoga. 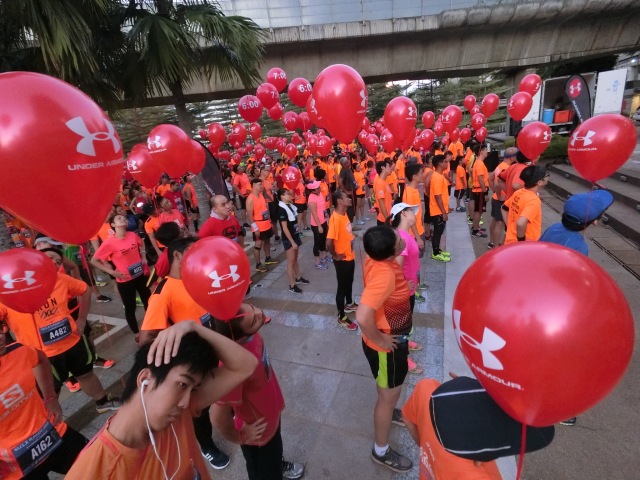 Moreover, the willingness of the founding members to accept all kinds of runners, from wily old hands to clueless beginners, into their inclusive running family is the right kind of open-door policy which sits well with a multicultural society such as ours. After all, the last thing we need now is another group of elitists who will divide rather than unite the community. 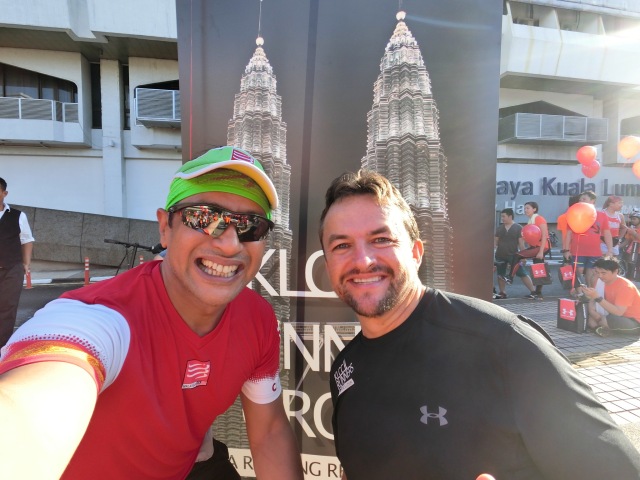 So, when KLCC Runners Group Leader, Matthew Barsing, posted an open invitation to the running community to participate in an organised 7km Run in conjunction with KL Car Free Morning, I took-up his offer. This article below describes my experience with KLCC Runners Group on that Sunday morning, and I had hoped to learn more about them, and at the same time, enjoy a nice run with friends.

I reached the gathering area in front of DBKL Headquarters just past 6:30am, and already there were a large group of runners queueing up to register and collecting their individually assigned running bibs with TIMING chip. 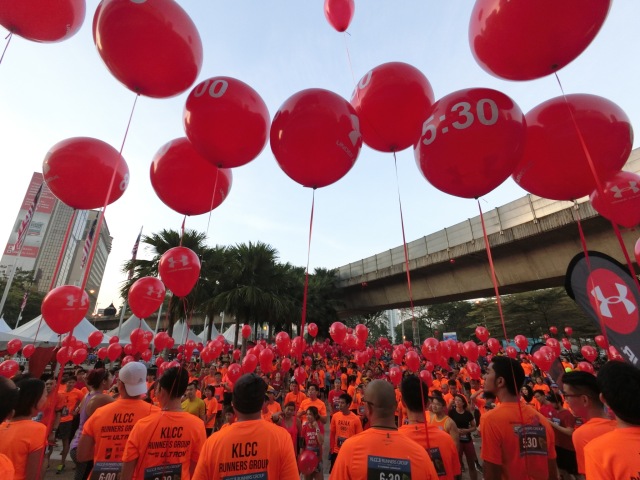 I was greeted by a seasoned veteran runner, “What are you doing here?”. I think he was wondering why I was not at TM Fun Run in Putrajaya on that same morning. In turn, his comments made me wonder what he was implying, but it was too much work for so early in the morning. So, I retorted back, “This is free!”. His facial expression told me that he had joined this event for similar reasons.

He further remarked with some irritation, “I don’t understand why some people would want to complain about this running group when they haven’t even participated in any of their events?”. Again, it was way too early to give him a full answer, so I just replied back, “Some people just love to complain for no apparent reason!”.

Finishing-up the small talk, I pinned my bib to my T-shirt and collected a RED BALLOON which all participants are required to carry along whilst running. 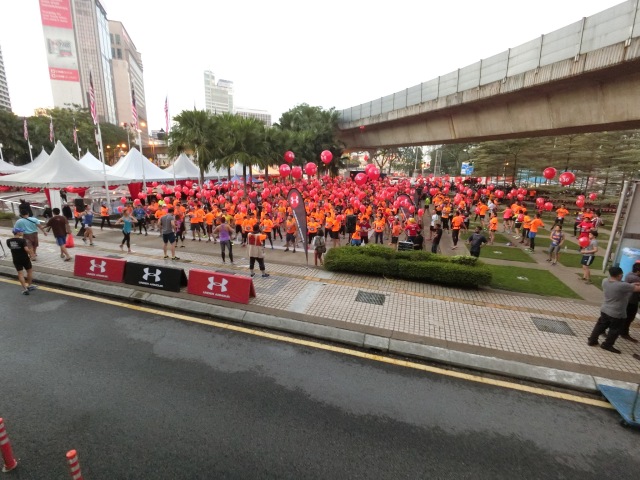 The presence of 500 runners running with red balloons through KL city centre was certainly a STRIKING picture to behold, and it added a party mood to the lively proceedings. 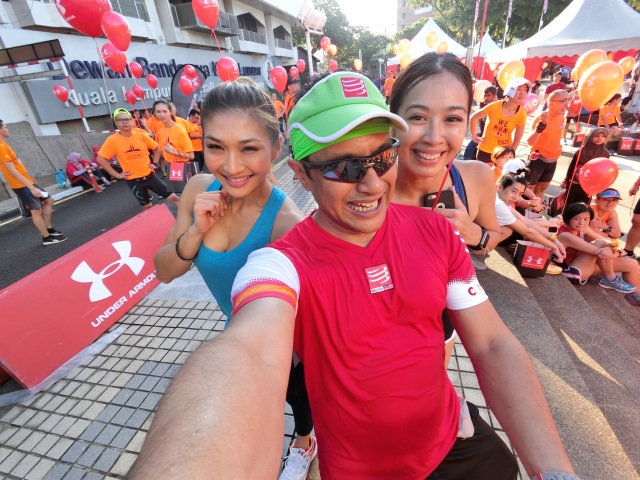 There was a team of ENERGETIC ambassadors from Under Armour who did a great job pumping-up the crowd with a highly animated warm-up routine just before the start of our 7km run along the KL Car Free Morning (KLCFM) route. See pre-race videos 1, 2 & 3. 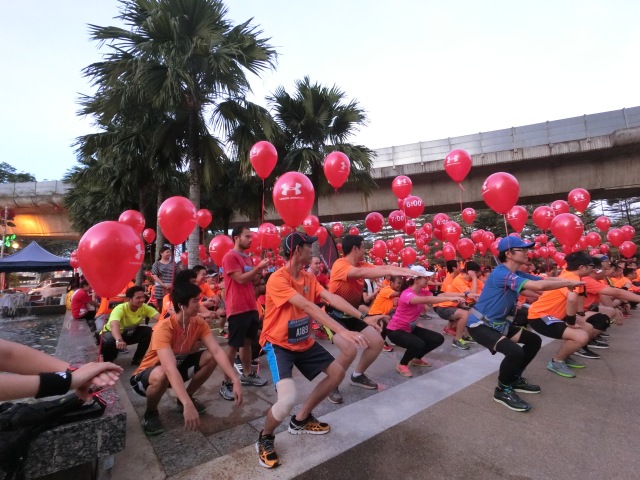 While the participants were busy mimicking the actions of those fitness gurus onstage, I had a chat with KLCC Runners Group Running Captain Sam who is a full-time IT Manager, as well as a certified running coach. Sam helps with the technical-side of running such as teaching runners about the proper techniques of running which is vital to improve performance and reduce injury-risks, and he is also in-charge of the Pacers. 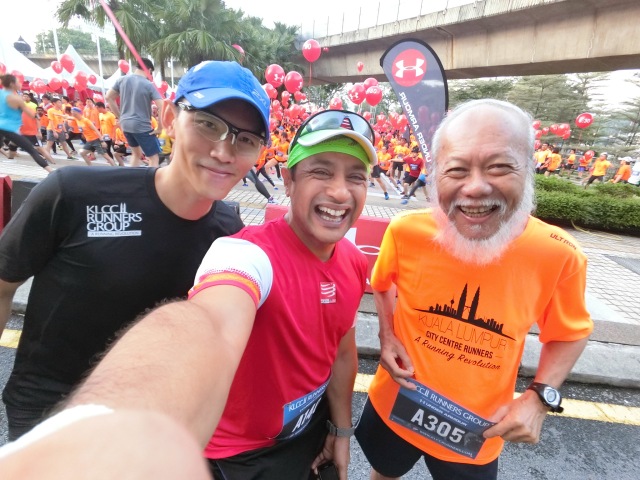 We started our run at 7:15am to avoid the KLCFM mob which were routinely flagged-off at 7am every 1st and 3rd Sunday of the month. 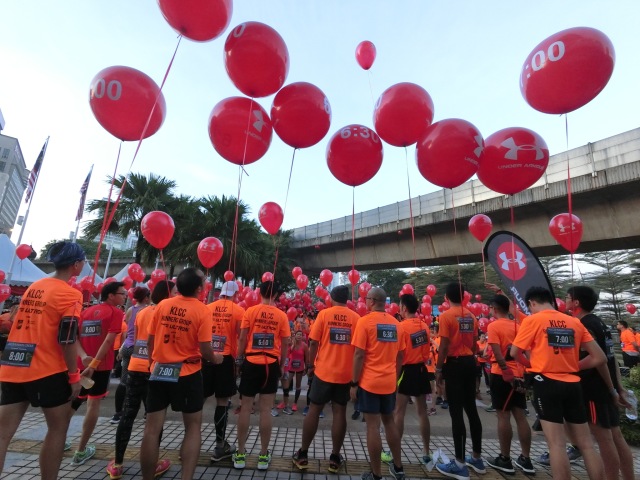 Another nice touch was the presence of 5-8 minute pacers, and I chose to run along with the two 8-minute pacers – Andrew Kwan & Daniel Moon. 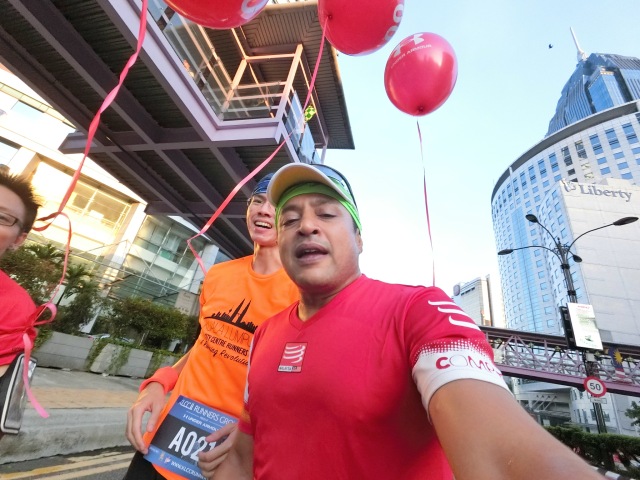 The ADVANTAGE of running slow was that I was able to chat (see video) and get to know more about these KLCC Runners Group members. Chatting away about gps watches, the upcoming #SCKLM2016, running shoes and injuries, time flew by quickly, and before we knew it, we were already back at the finish line with near-perfect pacing. 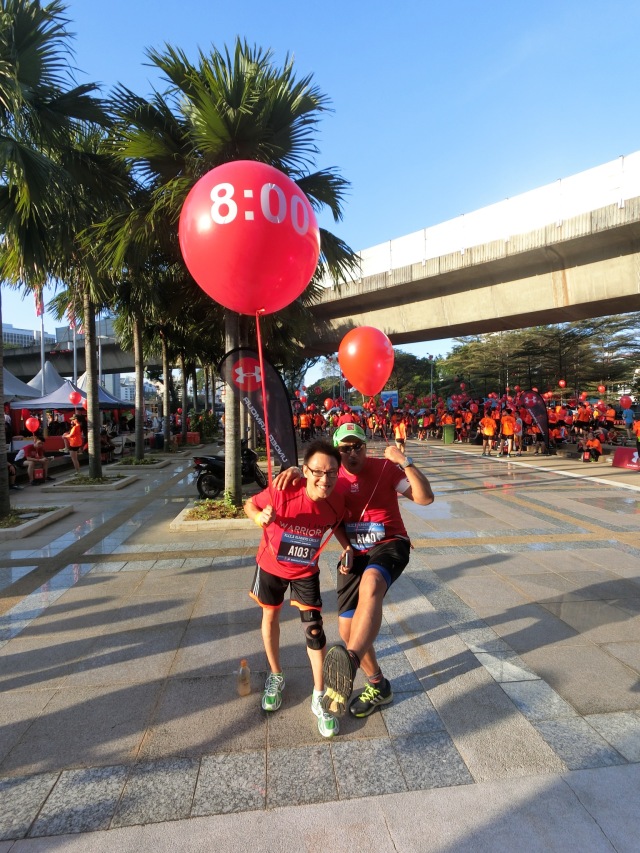 At the finishing area, we exchanged our bibs for a goodie bag of imported drinking water, 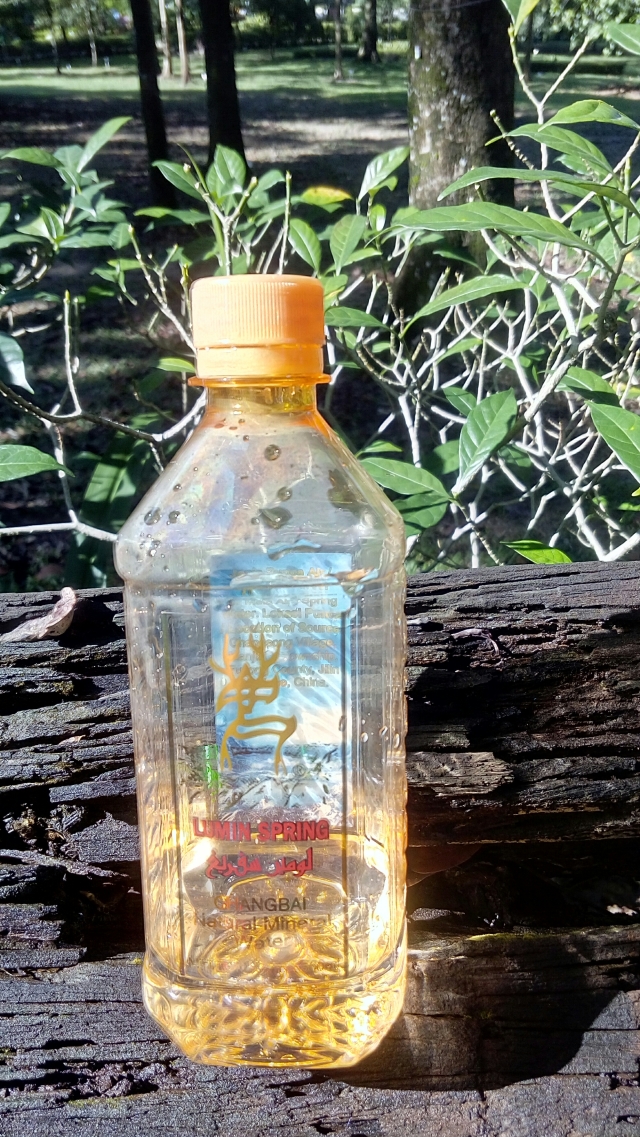 a banana, an Under Armour wristband and a couple of vouchers for some FREE fitness workouts. Everyone was feeling pretty relaxed, while enjoying a glorious sunny day. 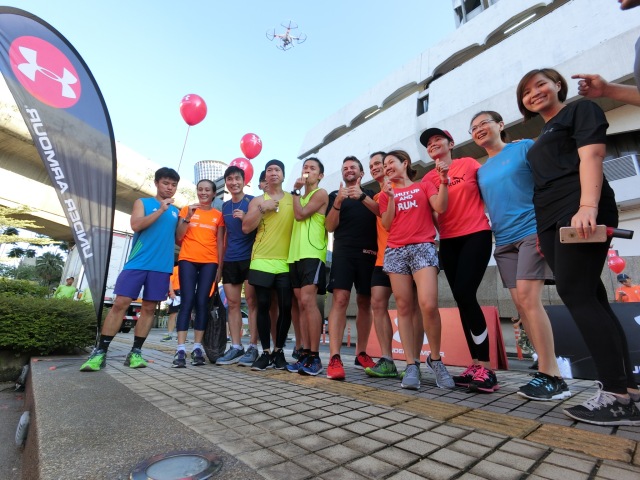 The top 5 male and female runners were each rewarded with a special Under Armour dog-tag and a limited edition KLCC Runners Group Dri-fit Tee. Meantime, the non-elite runners waited eagerly for the announcement of the lucky draw winners. 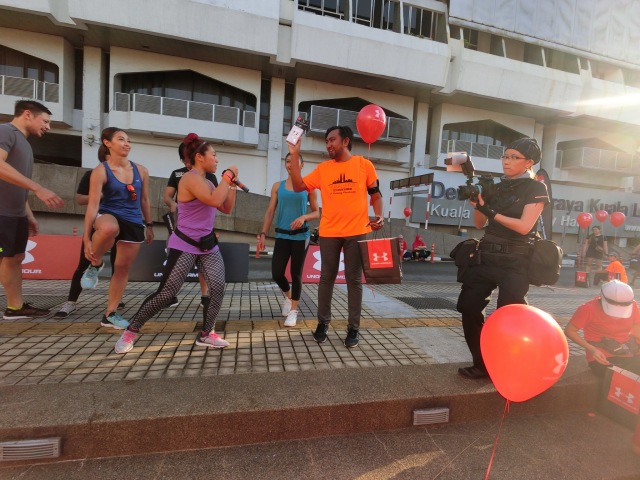 I bumped into a few running buddies who have been noticeably absent from the running scene lately due to injuries. 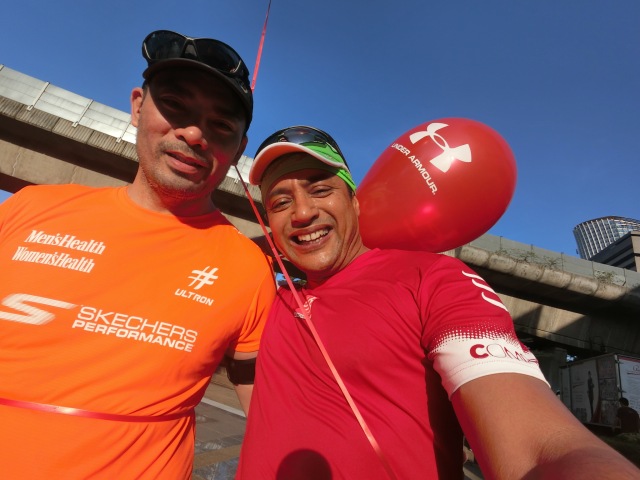 I must say that the post-race atmosphere was the same as one would find at any good running event, and looking at all the contented faces, I am sure that everyone had an ENJOYABLE outing. 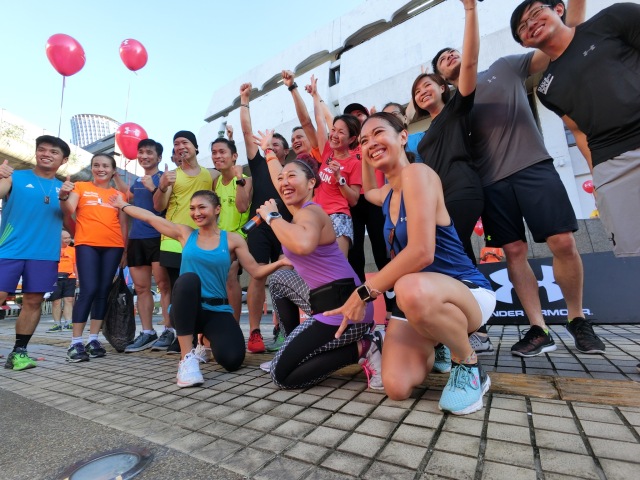 I took the opportunity to take a photo with Malaysia’s Mixed Martial Arts Superstar, Peter Davies, who was also the Under Armour ambassador. 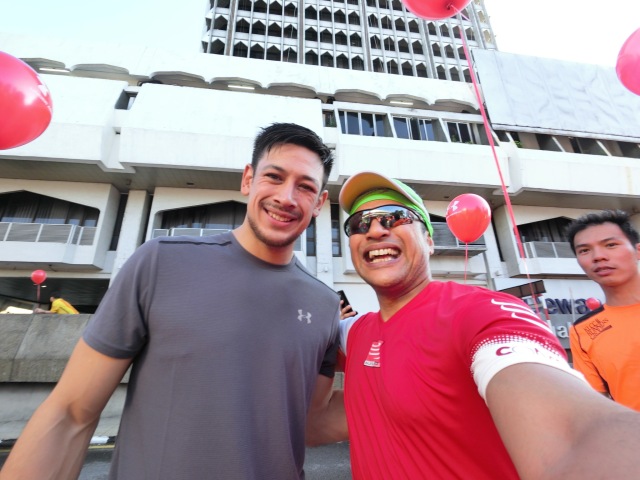 As you can see from my video interview with Matthew, he was elated with the successful outcome of KLCC Runners Group first major event collaboration with Under Armour. Off-camera, Matthew confided, “This is just the beginning, and we are planning many more exciting activities for our members in the very near future”. 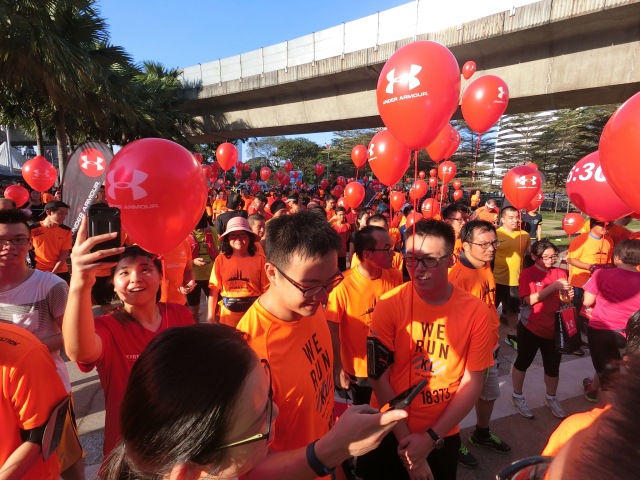 Their tagline, Running Revolution, is certainly APT because in a relatively short span of a few months since the inception of KLCC Runners Group, this bunch has captured the imagination of the public with their highly innovative ideas of making running exciting and fun again. 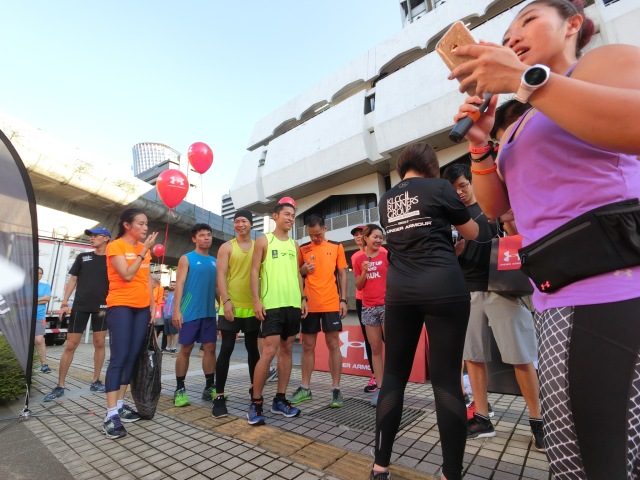 For those who are not familiar with KLCC Runners Group, their boundary-stretching ways and their highly-charged postings can be misconstrued as a bunch of self-serving unknowns breaking the long tradition of what defines a running group. However, after interacting firsthand with their key personnel, I believe that all the claims made by the group are genuine and transparent. In this Digital Age, KLCC Runners Group are brave enough to try new ideas and forge their own tracks because they really believe in what they are doing, and doing it with passion. Personally, I insist that the success of any running group to grow will hinge on its ability to benefit the members first and foremost, and to keep-up with the changing times. Yes, although the basic principles of running remain unchanged, the expectations of runners today can drastically differ from those of yesteryear. In short, to remain relevant, running groups need to INNOVATE, EVOLVE and ADAPT to the ever-changing landscape of society. The alternative is plainly not worth contemplating.

After the crowd subsided, I popped next door to the Raya Gathering organised by KL Car Free Morning for a hearty spread of fried noodles, lemang, chicken rendang, peanut sauce and ketupat. It felt like all the calories burned previously were replenished and then some. Thus, the cycle of ‘Run and Eat’ is once again complete. 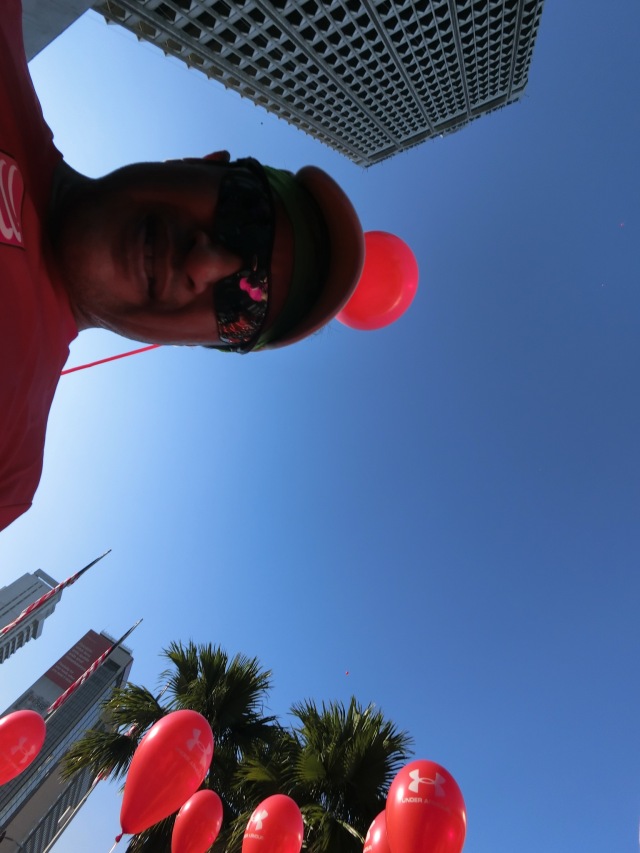 Let me congratulate the whole Team of KLCC Runners Group, Sponsors, Volunteers and Photographers on a very well-organised event, and for some ground-breaking firsts.

DBKL and KL Car Free Morning should also be acknowledged for sanctioning this event.

Be Part Of This Running Revolution? That’s easy, just Like KLCC Runners Group. 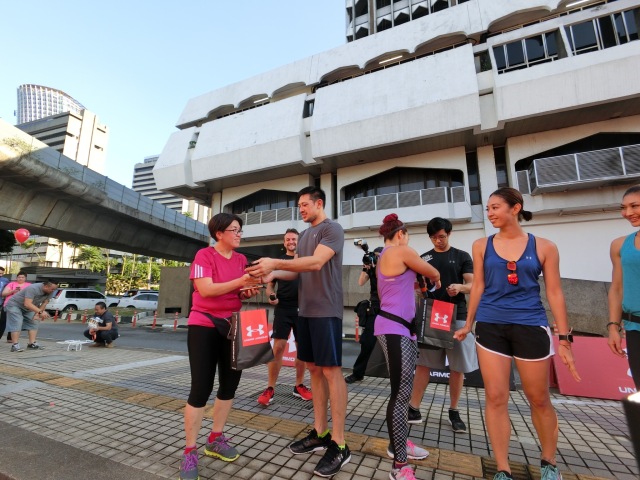 Hi:) My name is Gus and I am a Fitness Coach who enjoys outdoor adventures. In particular, I like to run marathons & ultra marathons, and compete in triathlons and century rides for fitness, fun & friendship. My passion is to motivate my friends to exercise more so that they can live life to the fullest. The purpose of this blog is five-fold:- 1) I find writing very therapeutic & beats paying for a psychiatrist to keep sane 2) I like to share & inspire others into engaging in any healthy pursuits 3) This is a great way to keep track of my progress in all my sporting endeavours 4) This also keeps me honest & spurs me on to do more 5) Even if you are a couch potatoe, I hope you will find my entries entertaining and/or informative. In summary, this blog is helping me help others help myself...get it?
View all posts by Gus Ghani →
This entry was posted in 2016, Casio Exilim Malaysia, Community, Fun Run, July, Kuala Lumpur, Media, Runners, Running, Running Community, Volunteers and tagged 7km, checkpoint, fun run, happy runner, KL Car Free Morning, klcc runners group, Media, Running, running revolution, Timing Chip, under amour. Bookmark the permalink.