The majestic Dataran Merdeka will always hold a special place  in the hearts of all Malaysians.  Its historical significance and central location make it the most sought-after event venue in Kuala Lumpur. As a runner, I felt proud and significant that the Federal Ministry and DBKL, had picked to organise a running event at these hallowed grounds on 1st January 2016. Even the Federal Minister, Dato’ Seri Adnan woke-up early to welcome all the participants, Malaysians and non-Malaysians, to the very first KL New Year Run 2016 (KLNYR 2016) event which would take Runners along a 10km & 5km scenic of KL city centre. The slight drizzle did not bother us one bit because we were there to celebrate our twin love for Kuala Lumpur, and Running.

I was lucky enough to be selected as a Team Ultron Ambassador by the official apparel supplier, Ultron, together with 19 other runners. On New Year, we were given, to wear during the run, a customised bright yellow Ultron running Tee with a new slogan, “Every WINNER Was Once A Beginner”, printed boldly in the front. My understanding of the new slogan meanings are:-

1) Beginners should not be intimidated or embarrassed by their lack of running skills and experience because we all started the same way.

2) Runners should support one another.

3) Running is equal for all.

As the newly elected Team Ultron Ambassadors gathered for a short briefing by Ultron Captain, Sarjit, he declared enthusiastically, “You guys are lucky because today, you will be the first batch to be given Ultron’s newly designed 2016 ambassador running Tees with better quality material”. Starting from April 2015, Ultron has appointed more than 350 running ambassadors to run in over 20 running events year-to-date. Good news for those who missed-out earlier is that will continue to sponsor  NEW running ambassadors in 2016 through announcements on Ultron FB page. 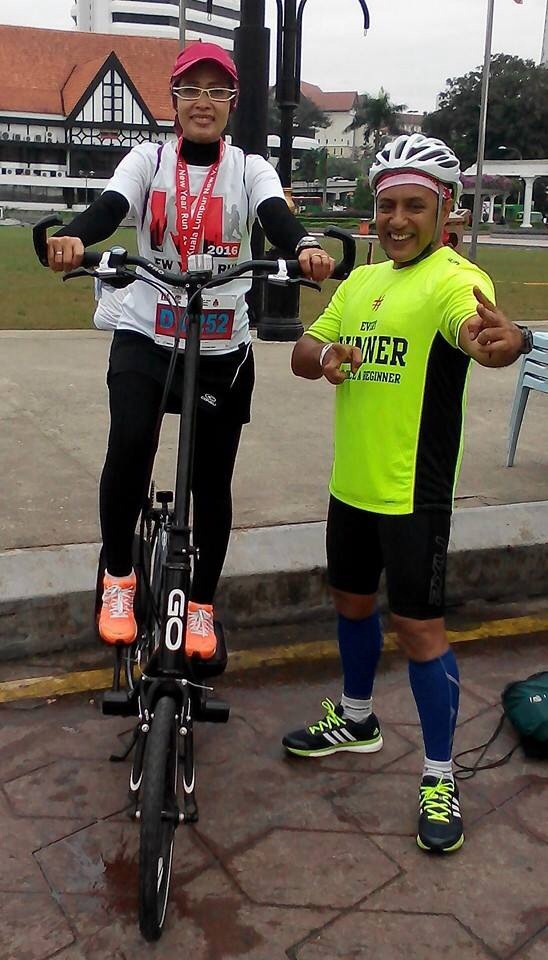 To properly usher in this New Year Day, I decided to ride my ElliptiGO bicycle from Subang Jaya to the race venue, and thus, make it my first Ride (34km) & Run (10km) for 2016. Cycling to and from the KL race venue makes for great warm- up and cool-down sessions, and moreover, I can park my ElliptiGO right next to the Start Line like some bigshot – how cool is that!

Everyone seems to be more cheerful and more hopeful on New Year’s Day 2016 because when the clock struck Midnight, we can erase all our problems of the last 12 months. Thereafter, with a clean slate, we are resolved to do better in the New Year. Such renewed hopes give us a greater sense of purpose to start planning ahead. The inaugural KL New Year Run 2016 was a unique opportunity to give its participants a positive ‘running start’ to 2016.  Indeed, the collective spirits among the 2,000 crowd were elevated, in anticipation of an exciting year ahead.

As soon as the tower clock struck 7:30am, the eager 10km runners made their way along Jalan Raja Laut, Jalan Sultan Ismail, Jalan Tun Razak, Jalan Ampang and finally, to the familiar home stretch of Jalan Tuanku Abdul Rahman. Being the first outing of the year, I was happy to run at a slow pace while engaging in idle chit-chat with fellow runners, and at other times, it felt like I was just floating above the streets, lost in my carefree thoughts.

As the finish line drew near, I kicked-up my heels and bombed to the finish line in order to successfully complete my first run of 2016 as a Team Ultron Ambassador. As in the case of many addicted runners, the sense of satisfaction of getting out of bed in the wee hours of the morning and jump-starting the day with a run never fails to lift my spirits and give me that extra boost of energy.

To mark this special occasion, all finishers were rewarded with an attractive medal, sling bag containing drinks and snacks, and a finisher certificate.  Then, everyone gathered in front of the stage for presentation of winners hampers and lucky draw prizes. Since it was a Friday Public Holiday, everyone was feeling particularly chirpy, and I wondered if KL New Year Run will return in 2017 because I could easily make this event my annual New Year Day Run. Well, it is probably too soon to make such commitments, but nevertheless, it is an option worth having for boring runners like me who typically spends every New Year Eve sitting quietly at home.

A Big Thank You to Federal Ministry, DBKL, Traffic Police, Ultron, the Organising Crew & Volunteers for successfully hosting such a memorable event. I hope KL New Year Run return again so that even more runners can experience the Double Joy of Running peacefully on New Year’s Day in the Heart of KL.

Hi:) My name is Gus and I am a Fitness Coach who enjoys outdoor adventures. In particular, I like to run marathons & ultra marathons, and compete in triathlons and century rides for fitness, fun & friendship. My passion is to motivate my friends to exercise more so that they can live life to the fullest. The purpose of this blog is five-fold:- 1) I find writing very therapeutic & beats paying for a psychiatrist to keep sane 2) I like to share & inspire others into engaging in any healthy pursuits 3) This is a great way to keep track of my progress in all my sporting endeavours 4) This also keeps me honest & spurs me on to do more 5) Even if you are a couch potatoe, I hope you will find my entries entertaining and/or informative. In summary, this blog is helping me help others help myself...get it?
View all posts by Gus Ghani →
This entry was posted in 10km, 2016, 5km, Dataran Merdeka, Happy Running, Kuala Lumpur, Road Race, Running, Uncategorized and tagged 2016, Datraran Merdeka, Federal Ministry, happy runner, KL New Year Run, kuala lumpur, Running. Bookmark the permalink.