Feel The Magic Of Moscow Circus 2018 In Malaysia

Feel The Magic Of Moscow Circus 2018 In Malaysia 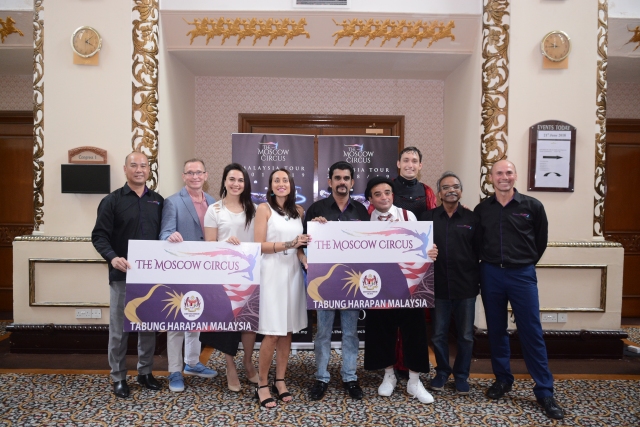 🎪🤡 Biggest & Best MOSCOW CIRCUS is coming to Malaysia in August 2018 for the first time to perform a show LIKE NO OTHER in 10 major cities,  and I was lucky enough to be invited to their press conference which was held at the Palace Of The Golden Horses on 21 June 2018 for an exciting sneak preview.

As a child, the circus represented to me a larger-than-life fantasy world where superhumans perform death-defying acts which would certainly capture the active imagination of any young boy and girl. Equally captivating was the circus human freak shows where unnatural human specimens with physical deformities like the infamous Elephant Man were on display.

Fortunately, in today’s post Barnum & Bailey grand circus era, the central actors of the biggest and best circuses in the world, like the Moscow Circus and Le Cirque Soleil, are elite acrobats, jugglers, illusionists and the comical clowns. Gone are the shocking days of the human cannonball and cruel animal circus acts. In their place, big top circuses are wooing the crowd with charming, graceful and mesmerising fantasy stories for Youngsters & Adults, acted out by a professional and glittering troupe of artistic performers…. 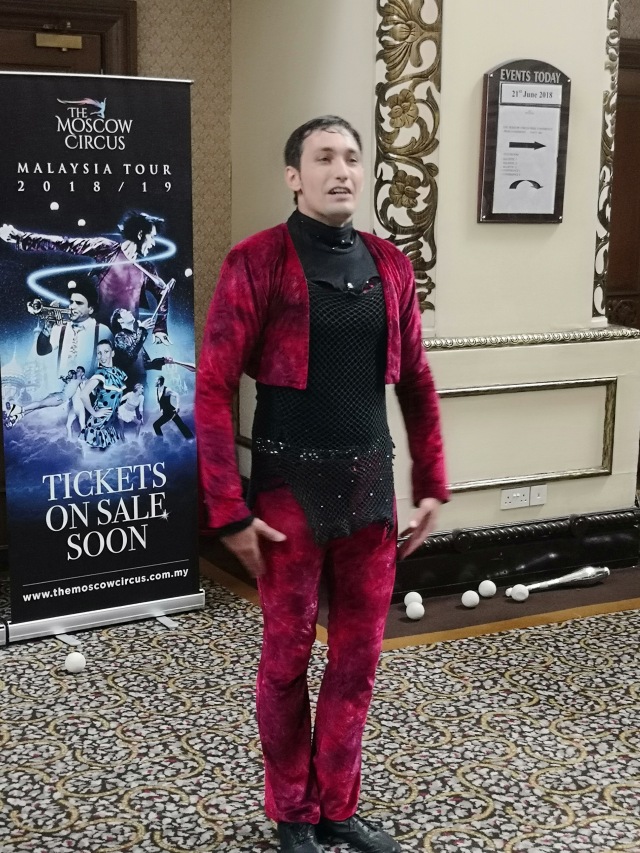 A comprehensive PRESS RELEASE is given below which will whet your appetite for a once-in-a-lifetime EXTRAVAGANZA where no expenses have been spared by the circus-loving event organisers – Mr. Kenneth Lee & Partners – in order to give the BEST EVER circus show for ALL Malaysians to MARVEL OVER!

Romance In The Air

Breathtaking acrobatics, aerialists and various circus acts will be on display during a 10-city tour around Malaysia that commences on 10 August 2018

SERI KEMBANGAN, 21 JUNE 2018 – For the first time ever, the world famous tradition of Russian circus will make its way to Malaysia in a sensational eight-month nationwide tour featuring a variety of dazzling and jaw dropping circus acts.

The engaging and extraordinary variety event will make its debut in Malaysia with performances in ten cities across seven states, commencing with the first show from 10 August to 2 September 2018 at Padang Timur, Petaling Jaya, moving up north to Queensbay Mall, Penang on 13 to 30 September as well as Auto City, Prai on 5 to 21 October, followed by the other earmarked locations including Melaka, Kuala Lumpur, Johor Bahru, Batu Pahat, Ipoh, Kuantan, and Klang, running all the way till 31 March 2019.

This special edition tour, also known as The Moscow Circus Tour of Malaysia 2018/19, is the brainchild of Executive Producers Dato’ Sri G Radakrishnan and Yahna SG, together with Producers Kenneth Lee and Mr Victor Pilipovic.

For the first time in history, The Moscow Circus will bring together troupes from two of the best and most well-known Russian circus companies – the Bolshoi Circus (aka The Moscow State Circus at Vernadsky Prospekt) and the Nikulin Moscow Circus.

“We are thrilled to announce The Moscow Circus Tour of Malaysia that will be held for the next eight months. This show is a unique opportunity to witness world-class performers from the renowned Nikulin Moscow Circus and Bolshoi Circus right here in Malaysia. We also look forward to bringing engaging activities during our tour stops around the country to showcase the acts and connect closely with the audiences along with our partners. It will truly be an exciting journey and an unforgettable experience!” said Kenneth Lee, Producer of The Moscow Circus Tour of Malaysia 2018/19.

Universally known as the capital of circus arts, Russian circus artists have, for decades, been thrilling audiences across the globe with spectacular performances full of power, artistry and world-class athletic skills. Visitors both young and old will be transported into a fantasy world through a unique array of performances by trapeze artists, jugglers, acrobats and gymnasts, all vying for attention and often at the same time!

Each performance will feature a two-hour long world-class programme encompassing nearly 40 professional performers guaranteed to keep audiences on the edge of their seats.

“It will be great opportunity for families, couples as well as groups of friends to enjoy an exciting experience of a lifetime, which is why we are offering affordable ticket prices from as low as RM50 and shows that lasts for over 24 days at each city. We do not want anyone to miss their chance of attending one of our shows and be in awe of the unique feats you won’t be seeing anywhere else,” added Kenneth Lee.

The Executive Producers and Producers have also taken extra measures to ensure the event provides a positive contribution towards the community and the Malaysian economy. In line with the government’s call for Malaysians to help the nation overcome its debts, a part of all proceeds from ticket sales will be donated to the government’s Tabung Harapan Malaysia. 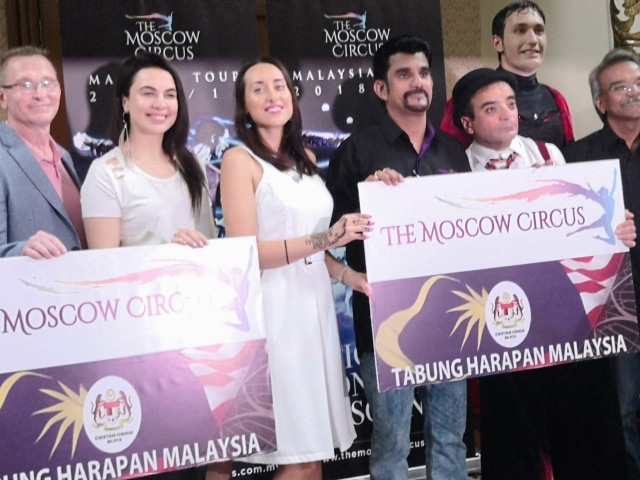 The Moscow Circus shall then equally match the amount collected with the hope that a total of at least RM1,000,000 will be raised for the fund during the tour.

“We are grateful to be given this opportunity to bring fellow Malaysian residents an internationally known group of artists to present an electrifying set of performances. Equally importantly, we also wish to play our part by contributing an amount from our sales to the government’s Tabung Harapan. Therefore, those who purchase our tickets will not only get to enjoy an unforgettable event, but will also be doing a good deed for the nation at the same time,” said Dato’ Sri G Radakrishnan, Executive Producer of The Moscow Circus Tour of Malaysia 2018/19.

Tickets to the show can be purchased at an affordable price from as low as RM50 and up to RM280 for top tier tickets. To complete the circus experience, the entire performance will take place under a 2,700-seater fully air-conditioned circus Big Top, which will be the largest circus tent to ever exist in Malaysia.

For more information about The Moscow Circus, visit http://www.themoscowcircus.com.my.

About The Moscow Circus Tour of Malaysia 2018/19

Executive Producers Dato’ Sri G Radakrishnan and Mr Yahna SG, together with Producers Mr Kenneth Lee and Mr Victor Pilipovic are proud to present for the first time ever in Malaysia, The Moscow Circus Tour of Malaysia 2018/19.

The Moscow Circus Tour of Malaysia 2018/19 is a special edition production featuring artists carefully selected and engaged from two of the biggest and most recognized state circus companies of Russia, the Bolshoi Circus (aka The Moscow State Circus at Vernadsky Prospekt) and the Nikulin Moscow Circus.

Universally acknowledged to be at the pinnacle of circus arts in the world, Russian circus artists have been thrilling audiences across the globe with performances full of power, artistry and world-class athletic skills.

The Moscow Circus will be embarking on a mammoth and unprecedented 10-city tour along the length and breadth of the country covering Petaling Jaya, Penang, Prai, Melaka, Kuala Lumpur, Johor Bahru, Batu Pahat, Ipoh, Kuantan and Klang. There are also plans afoot to bring the show to Sabah and Sarawak after the tour of West Malaysia. The West Malaysian tour will kick off on 10th August 2018 and will take over eight months to complete.

The show is a two-hour long world-class program featuring nearly 40 performers who will start the program with a visually stunning cavalcade of the entire cast, followed by presentations of dangerous and thrilling acts by aerialists, high wire walkers, trapeze artists, acrobats, a juggler, roller-skaters, diabolo spinners and illusionists, all held together by one of Russia’s most well-known clowns, Armen Asiryants.

To make the circus experience complete, the entire performance takes place under a 2700-seater fully air-conditioned circus Big Top. The Moscow Circus tent will be the largest circus tent in Malaysia. 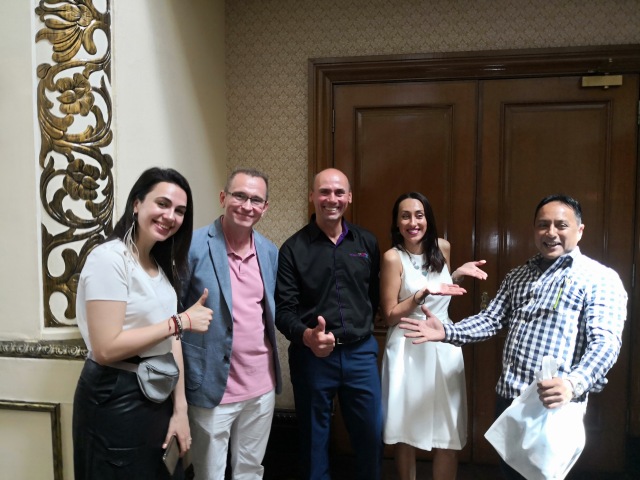 Special Thanks to The Moscow Circus,

Kenneth Lee, Producer of The Moscow Circus Tour of Malaysia

Victor Pilipovic, Producer of The Moscow Circus Tour of Malaysia

*Disclaimer*
To the best of my knowledge, all of the information provided herein is accurate at the time of publishing and the views expressed are based on my own personal opinions and findings, and they don’t necessarily reflect the views of the Product Manufacturer, Event Organiser or any Third Party unless explicitly specified otherwise.

Gus Ghani is the Founder of Running Toons and a HIIT Fitness Coach, and Magazine Columnist.  He has contributed numerous insightful articles to The Star newspaper, Running Malaysia Magazine, and Cycling Malaysia Magazine. LIKE Happy Runner for RUNNING UPDATES, Gus Rider for CYCLING NEWS, Gus Ghani for SPORTS INFOTAINMENT and FOLLOW gusghani @IG for LIFESTYLE.

Hi:) My name is Gus and I am a Fitness Coach who enjoys outdoor adventures. In particular, I like to run marathons & ultra marathons, and compete in triathlons and century rides for fitness, fun & friendship. My passion is to motivate my friends to exercise more so that they can live life to the fullest. The purpose of this blog is five-fold:- 1) I find writing very therapeutic & beats paying for a psychiatrist to keep sane 2) I like to share & inspire others into engaging in any healthy pursuits 3) This is a great way to keep track of my progress in all my sporting endeavours 4) This also keeps me honest & spurs me on to do more 5) Even if you are a couch potatoe, I hope you will find my entries entertaining and/or informative. In summary, this blog is helping me help others help myself...get it?
View all posts by Gus Ghani →
This entry was posted in 2018, Entertainment, Event, Event Organiser, Family, Kuala Lumpur, Lifestyle, Media, New Event, Petaling Jaya, Press Conference, Preview, Video and tagged Acrobats, August, Big Top, Clown, Entertainment, Family, Flying Trapeze, Illusionists, Juggler, Palace Of The Golden Horses, petaling jaya, Press Conference, Russia, The Moscow Circus, Tour Of Malaysia. Bookmark the permalink.