Sharing Event Info provided by and on behalf of Dirigo Events S/B. 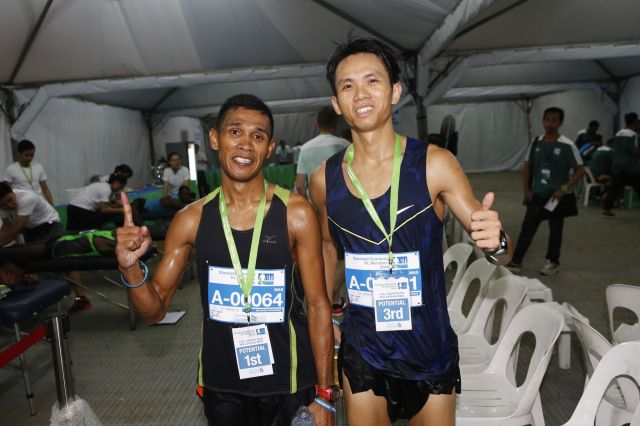 THE HEAT IS ON AT THE STANDARD CHARTERED KL MARATHON 2017

KUALA LUMPUR, April 2017: The Standard Chartered KL Marathon (SCKLM) 2017 is gearing up to be a highly competitive race, particularly in the Malaysian Men’s category, as the top Malaysian marathon runners will be competing for honours as well as hoping to catch the attention of the selectors of the KL SEA Games squad.

Last year’s Full Marathon winner in the Malaysian category was Muhaizar Mohamad with a time of 2:39:24, followed by Mohd Jironi Riduan in second place with a time of 2:39:56 and Tan Huong Leong in third recording a time of 2:41:53. Not only are all three runners back for SCKLM 2017, but their contest will be given an added edge because of the SEA Games in KL later this year. Tan in particular, has been recording really fast times recently with a 2:35:24 at the Taipei Marathon in December and 2:28:19 in the recently concluded Tokyo Marathon, which is one of the fastest times recorded by a Malaysian for the full marathon.

“We are really looking forward to a hotly contested SCKLM 2017, especially in the Malaysian Men’s Full Marathon Category,” said Rainer Biemans, Director of Dirigo Events and Project Director of SCKLM 2017. “This augurs well for our event as one of our key objectives has been to raise the competitive level of the SCKLM. And as the selection for the SEA Games is only finalised in July, these runners will be eager to push hard to try to earn selection,” he added.

Defending Malaysian Men’s champion Muhaizar Mohamad knows that SCKLM 2017 is potentially his best bet to get into the national team for the KL SEA Games 2017. Muhaizar has dominated the Malaysian Men’s category for the Full Marathon the last couple of years. The Armed Forces personnel largely trains on his own but a short stint under Mark Williams, the Official Running Coach that runs SCKLM’s Running Clinics, enabled him to achieve his personal best at last year’s SCKLM. “I don’t have a personal coach so it’s going to be tough for me to post faster times. I realised how much a coach could help me when I trained under Mark Williams. The plan he devised is what helped me to achieve my fastest time so far at last year’s SCKLM,” said Muhaizar. “But as the SEA Games is on home soil this year, I will be going all out in SCKLM 2017 to hopefully beat my personal best and qualify for the Games,” he added.

Tan, 29, could be the man to watch as his current personal best is well within the qualifying mark. He has been training in Taiwan, where he works as an engineer, under professional Taiwanese distance running coach Lim Chen Ming for the last two years and the results are beginning to speak for themselves. His timing at the last Standard Chartered KL Marathon has been shaved by almost 13 minutes albeit in much more temperate conditions in Tokyo compared to Kuala Lumpur. It will certainly be interesting to see how fast he can go in the sweltering conditions here.

“I’m really looking forward to SKLM 2017. While I’m not setting any particular goals for this event, I still want to do my best for this run and hopefully my name is in the list for the SEA Games come July,” said Tan.

Another Malaysian to look out for in SCKLM 2017 is current national record holder of the Half Marathon Malaysian Women’s category Sheela Samivellu. Sheela smashed her own previous record at SCKLM 2016 and will be gunning to clinch a spot in the SEA Games through a strong showing in this year’s SCKLM. The Principal Assistant Director with the Ministry of Well-Being, Housing and Local Government started running from an early age and has participated in the SEA Games several times before. “I started running when I was five and the journey continues. What started as a means to be happy and to reduce stress has become something more serious now. Breaking the national record at SCKLM2016 was the proudest moment in my career so far and I hope I can finish just as strongly this year as that would put me in a good position for the SEA Games in August,” said Sheela.

The Standard Chartered KL Marathon has grown to become the premier running event in Malaysia that draws thousands of local and international runners to the country whilst firmly establishing Malaysia in the global running calendar. The 2017 edition of the race will once again see sponsorship from Title Sponsor Standard Chartered Bank Malaysia, along with Honda Malaysia, Brooks, Lucozade, Seiko and Pacific Regency.

Elite runners will be competing to earn a slice of the almost RM500,000 in total that is on offer at the Standard Chartered KL Marathon 2017,which include bonus prizes for record breaking course times.

About the Standard Chartered KL Marathon 2017

For more information on the Standard Chartered Kuala Lumpur Marathon, please log onto:  http://www.kl-marathon.com/ and http://www.facebook.com/SCKLmarathon.

We are a leading international banking group, with around 84,000 employees and a 150-year history in some of the world’s most dynamic markets. We bank the people and companies driving investment, trade and the creation of wealth across Asia, Africa and the Middle East. Our heritage and values are expressed in our brand promise, Here for good. Standard Chartered PLC is listed on the London and Hong Kong Stock Exchanges as well as the Bombay and National Stock Exchanges in India. For more information please visit http://www.sc.com. Explore our insights and comment on our blog, BeyondBorders. Follow Standard Chartered on Twitter, LinkedIn and Facebook.

About Standard Chartered in Malaysia

Standard Chartered employs close to 7,000 employees in all its Malaysian operations.

The Standard Chartered KL Marathon is owned by Dirigo Events Sdn. Bhd, an award-winning event management company founded in 2011 by Rainer Biemans and Gloria Ng. The event not only draws a large number of Malaysian runners, but attracts runners from more than 70 countries around the world.

The Standard Chartered KL Marathon was awarded the Platinum award in the Kuala Lumpur Mayor’s Tourism award in 2014 for bringing tourists to Kuala Lumpur. The award is testimony to Rainer Biemans’ and Gloria Ng’s combined experience of over 48 years in executing and creating world-class and impactful events for international clients around the world such as Europe, Brunei, India and Singapore.

Hi:) My name is Gus and I am a Fitness Coach who enjoys outdoor adventures. In particular, I like to run marathons & ultra marathons, and compete in triathlons and century rides for fitness, fun & friendship. My passion is to motivate my friends to exercise more so that they can live life to the fullest. The purpose of this blog is five-fold:- 1) I find writing very therapeutic & beats paying for a psychiatrist to keep sane 2) I like to share & inspire others into engaging in any healthy pursuits 3) This is a great way to keep track of my progress in all my sporting endeavours 4) This also keeps me honest & spurs me on to do more 5) Even if you are a couch potatoe, I hope you will find my entries entertaining and/or informative. In summary, this blog is helping me help others help myself...get it?
View all posts by Gus Ghani →
This entry was posted in 10km, 2017, 21km, 42km, Brooks, Dirigo Events, Event Organiser, Full Marathon, Half Marathon, Happy Runner, Kuala Lumpur, May, Media, Running, Running Event, SCKLM, SEA Games, Sports, Standard Chartered Kuala Lumpur, Uncategorized and tagged Full Marathon, happy runner, kuala lumpur, Media, Race, Running, SCKLM. Bookmark the permalink.