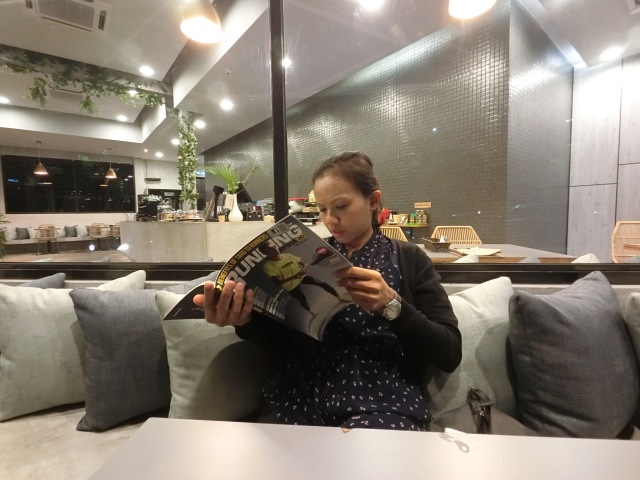 How crazy can running 12 hours be if there are 350 people willing to do it?! The runner’s logic for joining such an ultramarathon is – “I love running, and so, the longer and further that I can run, the happier I will be”! Obviously, this is fallacy when it comes to a grueling ultramarathon.

It’s been 7 long months since my last Ultra event, so I wanted to rekindle my smouldering Ultra flame before it extinguishes altogether.

Besides, the allure of experiencing a new ultra event, offering new and different challenges, proved too irresistible, and the rest is history.

As First Published In Running Malaysia

After completing the event, I was elated to be able to share my latest Ultramarathon experience in Running Malaysia magazine, Mar/Apr 2017 (Issue 2⃣0⃣).

Atleast, I am guaranteed to have one interested reader, my wife!

In case, you could not find a copy, I have also included the original and unedited article herein below for prosperity. Hope, you enjoy reading it as much as my feet suffered for it 😥

What Does It Take To Run An Ultramarathon?

The simple answer is that you will need to be UNBREAKABLE!

For the record, my Ultra quests have been limited to successfully completing only three 50km and one 84km Ultra Marathons which certainly doesn’t make me an expert on the subject.

My only failure happened last year in May at the Eco 100 Ultra Trail Marathon (UTM), staged at Bukit Mertajam, when I pulled-out of the race at the second checkpoint, after completing only 30k of the required 100k total. I learnt much more about myself and ultra running in that one moment than in all my successful past ultra races put together. In fact, the saying that “Success Does Not Teach You Anything”, was true in my case.

Bouncing Back From Defeat

Initially, my first major running DNF (Did Not Finish) was hard to accept and it was frustrating to have a blemish on my otherwise perfect race records. However, I was determined NOT to waste my time wallowing in self-pity, and after some soul-searching, I did salvage 3 valuable lessons from that sombre episode which have greatly helped me become a better runner.

My 3 Pillars Of Ultra Running

After going through some trial and error, I can share 3 of my most important tips for Ultra Marathons as follows :-

Failure Is An Option: Previously, I was consumed with, and driven by Fear whenever I took part in any Ultra Marathon. I would be afraid of not being able to reach the checkpoints on time. I would be afraid of not being able to cross the Finish Line. I would be afraid of getting lost in the darkness. I would be afraid about picking up an injury or running out of energy prematurely. Then,it dawned on me that this approach to Ultra Running was unrealistic and unworkable. So, I replaced my “Fear To Fail” outlook with a more upbeat “Dare To Fail” approach. The idea behind my new mindset was to allow myself the freedom to take on Ultra Marathons as as a way to test my physical endurance limits, but if I happen to DNF, then I will take it as a learning experience to help me grow and become a smarter runner. On paper, this sounded like a Win-Win scenario, but I will still need to test if it works in a real ultra racing conditions

Mind Over Matter: It takes an unusual or even a crazy breed of runners to attempt an ultra marathon which is typically any distance from 50km to 200km! Contrary to popular belief, ultra marathon is not so much about who can run the furthest, but it’s all about who wants it bad enough. You may be the slowest runner in the field, but if you have the Mental Fortitude to battle through the inevitable intense pain and weariness of Ultra Marathons, then you ought to finish the race in good stead or in one piece, at least. So, before someone decides to venture into an ultra marathon, they must first overcome the gigantic mental barrier which stops us from even attempting to run such a ridiculously long distance.

I Run To Eat

Discover What Motivates You: It goes without saying that you need to train hard to reach your weekly running mileage goals. Equally important, every ultramarathoner must be clear on their reasons and motivation before the race, because when the going gets tough and doubt starts creeping into your mind, you need to remind yourself why you are torturing yourself. Your reasons to complete the race must be compelling enough to stop yourself from quitting when your mind and body is pushed to its very limits.

When Race Director of UiTM Running Club, Aizuddin Imran, invited me to his inaugural UiTM Ultra Marathon which consisted of running 10 times around a 5.2k hilly route within the UiTM Campus with a 12 hours cut-off time, I was ready to take-up this new challenge.

The advantage of running in loops is that there is one bag-drop area at the Start/Finish Line where the runners can change clothes, eat and rest all in one place at your convenience.

The disadvantage is that some runners will find it too boring having to run in circles and passing the same scene over and over again.

As I stood there at the Start Line, a few minutes before the 10pm flag-off, it was the first time that I was not shivering with fright at the thought of running an ultra. In fact, I was pumping myself up with positive thoughts such as, “It’s not the Winning or Losing that matters, but it’s the Taking Part that counts!”.

It was going to be a long night, so I ran at a slow pace, so as not to expend too much energy too quickly.

For some reason, for the first 4 loops, I ran barefoot. Perhaps, I wanted to feel awaken by my soles touching the tarmac road.

After each loop, I would stop for the drinks and light snacks of peanut butter sandwiches & fresh fruits to keep my energy levels up.

After 20.8km, my feet were getting too tender, so I put on my shoes and continued running into the night.

The majority of the roads were well lit and in good condition. The steep hills slowed some runners like me to a walking pace, and I would run faster downhill to catch-up for lost time. Frankly, I like the hills because it breaks the monotony of running at the same pace on a flat course.

Whenever I run past midnight, I will get very sleepy after 2am, and at the peak of sleepiness around 3am, I was fighting hard to keep my eyes opened. Fortunately, the True Start performance coffee stall at the transition area had freeflow coffee for the sleepy runners. After 5am, my sleepiness disappeared and I was able to focus on urging myself to keep running. 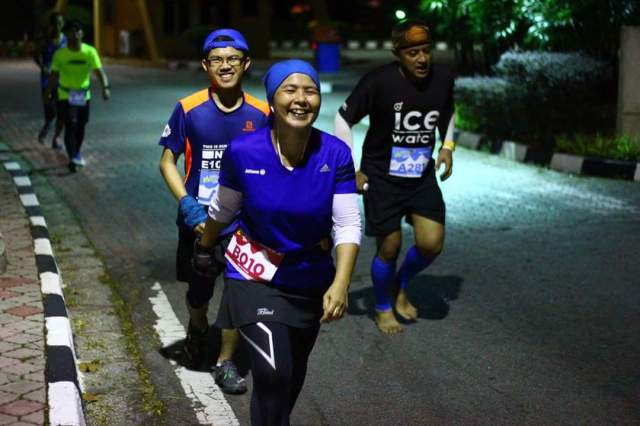 Fortunately, there was always other runners nearby to keep each other company; we fed-off each other’s energy, and it really helped knowing that we were not alone in our sufferings.

At my last 5.2k lap, I was on course for a finishing time of 10 hours which was well within the cut-off time.

Meeting up with Ultra Marathon Newbie Rizal along the way, I decided to walk together with him so that I could give him some positive words of encouragement as he still had 2 laps to go. It was at that moment that I really appreciated my new running philosophy of Dare To Fail because it allowed me to forget about the destination of the Finish Line, and instead, I felt relaxed enough to enjoy every step of my epic running journey, be it a 50k long distance or a 5k fun run…. 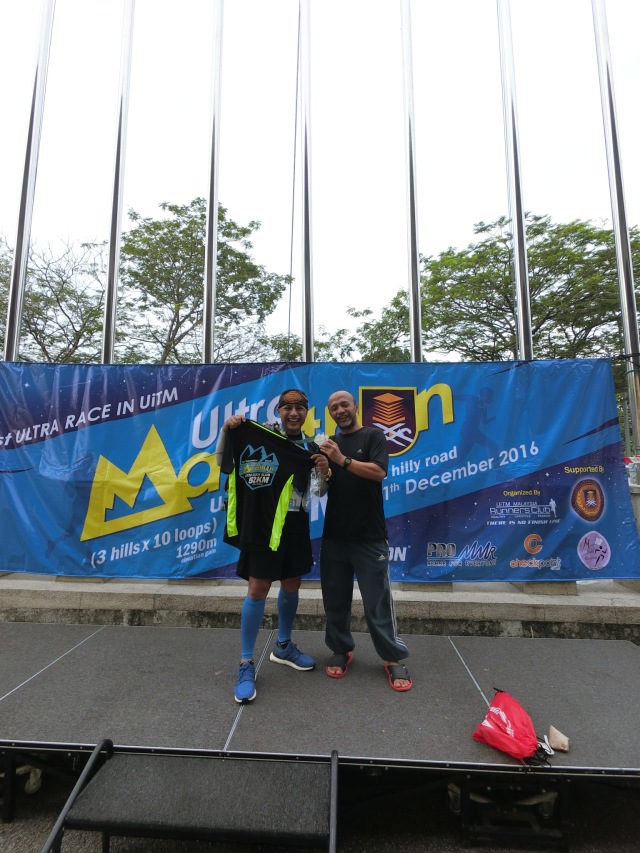 About The Author
Gus is the Founder of Running Toons and a HIIT Fitness Coach. As a freelance WRITER, he has contributed numerous insightful articles to The Star newspaper, Running Malaysia magazine, Cycling Malaysia magazine, Cycling Evolution magazine, Swim Bike Run magazine and more. LIKE Happy Runner for RUNNING UPDATES, Gus Rider for CYCLING NEWS, Gus Ghani for SPORTS INFOTAINMENT and FOLLOW gusghani @IG for LIFESTYLE.

Hi:) My name is Gus and I am a Fitness Coach who enjoys outdoor adventures. In particular, I like to run marathons & ultra marathons, and compete in triathlons and century rides for fitness, fun & friendship. My passion is to motivate my friends to exercise more so that they can live life to the fullest. The purpose of this blog is five-fold:- 1) I find writing very therapeutic & beats paying for a psychiatrist to keep sane 2) I like to share & inspire others into engaging in any healthy pursuits 3) This is a great way to keep track of my progress in all my sporting endeavours 4) This also keeps me honest & spurs me on to do more 5) Even if you are a couch potatoe, I hope you will find my entries entertaining and/or informative. In summary, this blog is helping me help others help myself...get it?
View all posts by Gus Ghani →
This entry was posted in Casio Exilim Malaysia, December, Event, Event Organiser, Happy Runner, Magazine, Media, New Event, Race Director, Race Organiser, Review, Running, Running Event, Running Malaysia, Selangor, Shah Alam, tips, Uncategorized, Video and tagged 52km, happy runner, Magazine, Media, newevent, Running Malaysia, Shah Alam, UiTM, UiTM Running Club, Ultra marathon. Bookmark the permalink.