The popular 40km ride up to Bukit Fraser from the colonial town of Kuala Kubu Baru is like a passage of rights among regular cyclists. If you can handle the 1,200m climb up to the iconic Clock Tower at the centre of Fraser Hill Resort then, it proves that you are a strong cyclist who can carry your own weight. 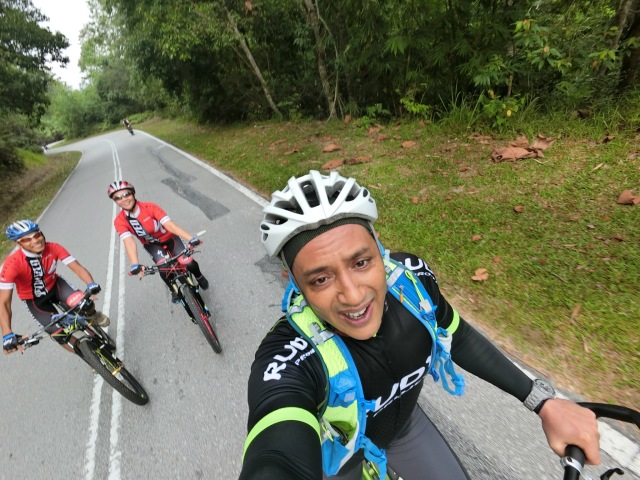 For cyclists who want to test their strength and endurance, as well as to enjoy, up close, some of Malaysia’s best protected nature reserve and gazetted wildlife sanctuary, the road to Fraser Hill is second to none.

Recently, I joined the first ever Fraser Hill KOM (King Of Mountain) Challenge 2016 to see if I still have what it takes to ride all the way up to the peak… 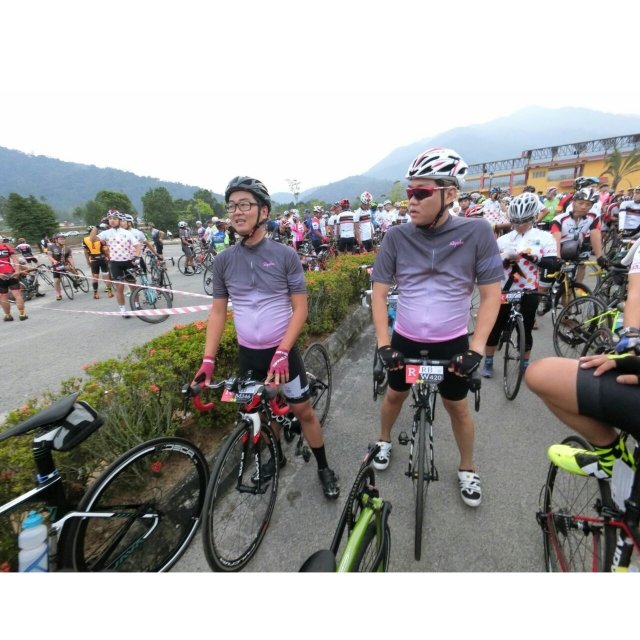 This is the first time that the 32km road from the outskirts of Kuala Kubu Baru (KKB) to the peak of Bukit Fraser was closed to public road vehicles, especially for this event.

This was the second time that Straco has organised a cycling event. The first one was the well-received Paya Indah Ride & Run Combo event in January 2016 which consisted of 46km trail ride for cyclists and 10km trail run for runners.

The Event Registration Portal was

Bikeaway.com.my, and the timing chip system was provided by Checkpoint Spot.

Jakroo US, under MAXX BIKES, were the official Jersey sponsors, and N8 Sports Nutrition and Sticks.com were some of the other Event Sponsors. 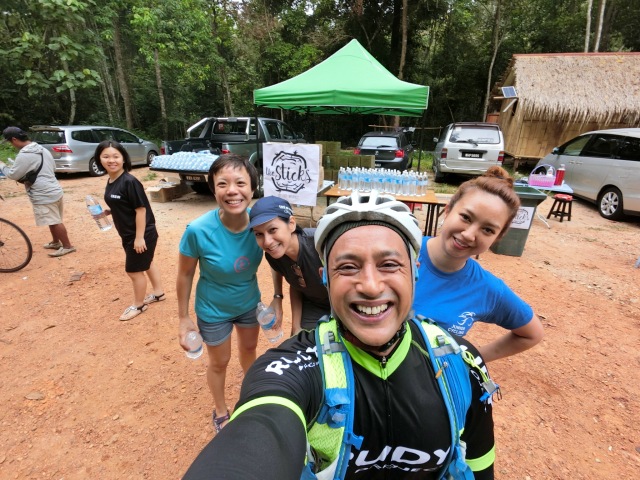 At 7:30am, 500 over keen cyclists rolled out towards Kuala Kubu Baru (KKB)Town from the Starting Point of Taman Millenium.

For the first 5km, we could not overtake the lead car until we reached at KKB outskirts where the road were closed. From that point on, we rode freely without any interference from any motorised vehicles.

Some of the local residents on the way to the market had stopped by the roadside to watch our colourful convoy of cyclists passed by. We were a fleeting distraction to their daily morning chores.

We passed the gigantic Ulu Yam Dam which is surrounded by a glorious mountain range of breathtaking natural beauty. For city-dwelling cyclists, the absence of high-rise buildings and shopping malls and other signs of city development was a rare and welcomed sight. It made me realise how unnecessarily complicated and wasteful our modern lives have become. When we are so engrossed in our busy lives, we become detached from Mother Nature. When we are surrounded by so many man-made buildings, commercial objects and artificial environments, we tend to forget how important it is to protect our precious life-giving natural resources like our rainforests, rivers and the clean air. Consciously and unconsciously, we start taking our natural resources for granted. If I had my way, I would charge all those guilty of illegal deforestation, open-burning and environmental polluters with national treason!

Therefore, participating in cycling events such as this Fraser Hill KOM Challenge is crucial in helping people reconnect and re-appreciate the fragility of Mother Nature.

It is the surrounding trees along the road to Bukit Fraser which provided us with much-needed shade and plenty of oxygen, and in turn, made our long ascent to the summit much more bearable. The soothing greenery and tranquility helped me find my inner peace and strangely enough, I was so overwhelmed by the infinite natural beauty that I totally forgot about the difficulty of climbing.

At the third and last Water Station just before The Gap, the riders were able to refresh themselves with a welcoming cold drink of N8 Endurance and water.

“Look, there’s a butterfly on your shoulder!” pointed out Khamal who was distributing sports drinks to the weary riders.

It felt like that beautiful butterfly was saying, “Welcome to Fraser Hill, my friend!” 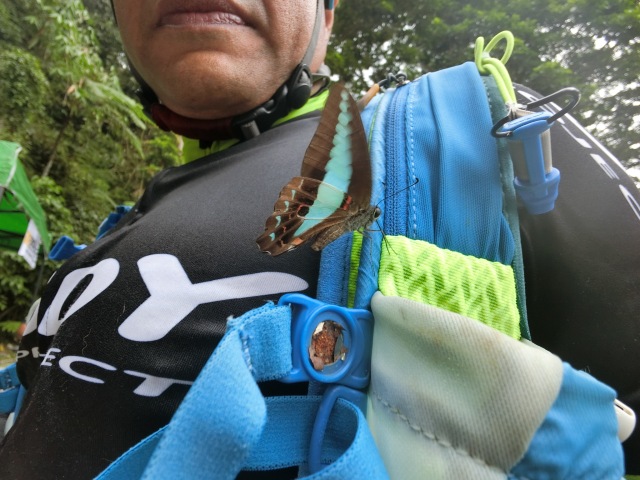 After 5 hours of cycling uphill, I finally made it to the Finish Point where the air was cool and refreshing. I collected my Finisher Medal, ate my hearty lunch of fish and rice, and I swear that ice-cream tastes better up here.

After taking a few obligatory photos at the iconic Clock Tower, I thanked the Joie and Becky of Straco Ventures for hosting a memorable event, and I made my way back 50km down to Taman Millenium. The exit to The Gap is perilous, but the rest of the journey down was a blast. After doing all the hard work reaching the summit, I was savouring the ride down. With very little traffic on the road, I was in cycling heaven as I glided down the hill without a care, and I was happily lost in my own little world. This whole journey had helped clear my mind, and being able to personally reconnect with nature again was like rebooting my soul. After such a rewarding ride, I felt rejuvenated and ready to face the hectic lifestyle of urban living again… 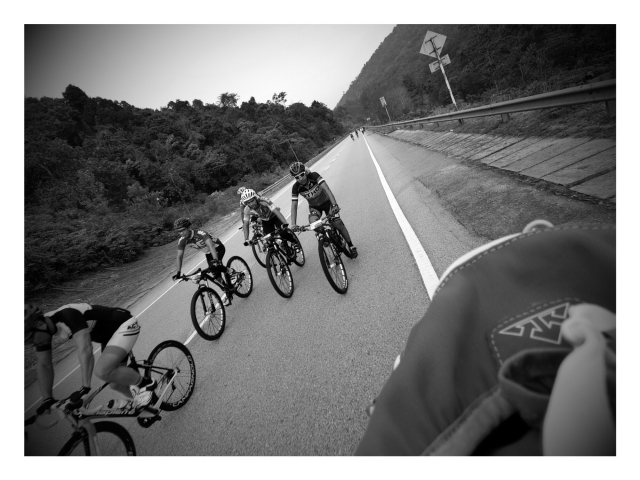 The Fraser’s Hill (‘Bukit Fraser’ in Malay) is a hill resort located on the Titiwangsa Ridge in Raub District, Pahang, Malaysia.

Fraser’s Hill has its roots in the 1890s, when the tin ore trade was bustling. After a failed gold mining venture in Australia, Scottish prospector Louis James Fraser arrived to explore the remote Titiwangsa mountains of Pahang.One day, he came across rich tin ore deposits embedded in several ridgetops, hidden by a thick drape of mossy forest. Opening up a mine, Fraser hired Chinese labourers and used mules to transport tin ore down a steep mountain track (Gap road today) to Raub town for trade. Eventually, Fraser himself moved up the hill and operated several gambling and opium dens for miners to find entertainment after work. Sometime around 1915, he vanished just as the tin deposits dried up and everyone moved away. Fraser’s Hill became overgrown as nature reclaimed the mined land while Fraser himself became somewhat of an enigma, as his mysterious disappearance has not been solved till this day. In 1917, the bishop of Singapore rediscovered Fraser’s Hill while on a hunt for the man, providing suggestions for the area to be developed into a hill station which was brought to fruition by authorities. The ensuing history is but a small detail that describes the growth of Bukit Fraser to present day, now one of Malaysia’s most popular nature and highland resort destinations.

The entirety of Fraser’s Hill is a protected nature reserve and gazetted wildlife sanctuary.

Hi:) My name is Gus and I am a Fitness Coach who enjoys outdoor adventures. In particular, I like to run marathons & ultra marathons, and compete in triathlons and century rides for fitness, fun & friendship. My passion is to motivate my friends to exercise more so that they can live life to the fullest. The purpose of this blog is five-fold:- 1) I find writing very therapeutic & beats paying for a psychiatrist to keep sane 2) I like to share & inspire others into engaging in any healthy pursuits 3) This is a great way to keep track of my progress in all my sporting endeavours 4) This also keeps me honest & spurs me on to do more 5) Even if you are a couch potatoe, I hope you will find my entries entertaining and/or informative. In summary, this blog is helping me help others help myself...get it?
View all posts by Gus Ghani →
This entry was posted in 2016, AfterShokz, August, Bicycle, Casio Exilim Malaysia, Cycling, Cycling Event, Elevation, Endurance Sports, Environment, Gus Rider, Ice-cream, Malaysia, New Event, Selangor, Tourism Malaysia and tagged 2016, August, cycling, environment, Fraser Hill, Jakroo, King Of Mountain, Kuala Kubu Baru, Malaysia, Mother Nature, Pahang, selangor, Straco Ventures, Taman Millenium, The Sticks. Bookmark the permalink.