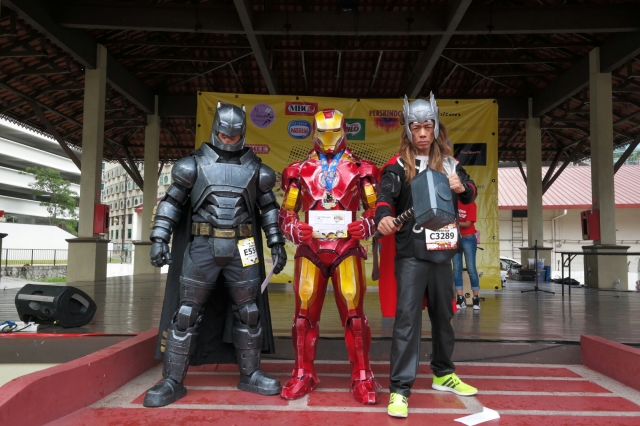 Imagine being able to run in the middle of Kuala Lumpur with your favourite Superheroes or even, running dressed-up as Batman or Superman. Sounds like a fantasy computer game, right? No, it really happened, thanks to event organiser, NM Galaxy who recently orchestrated KL’s first Superheroes Race 2016 which gave thousands of adults and children the opportunity to enjoy a costume-themed fun run of 3km, 10km and 15km respectively.

The Superheroes Race is the brainchild of NM Galaxy CEO, Muazan Mohsin who explained, “We wanted to give runners a unique running experience, and we selected a Superheroes theme because everyone has their own heroes, in real-life or in fantasy.”

Judging by the huge leap in the event participants, from only 800 runners last year to a whopping 5,000 this year, it seems that Muazan’s novel idea has won over the fans of comic and movie action heroes.

Last year, I ran 10km in the inaugural Superheroes Race 2015 at Bukit Jalil, and this time, my wife Maryati and I decided to enroll ourselves in the new 15km category as it would help us prepare for the PJ Half Marathon scheduled later in August.

On a cool Sunday morning, the 15km runners were flagged off first at 6:30am from MATIC headquarters in Jalan Ampang, followed by the 10km and 3km runners.

Maryati & I gave the organisers high scores for  providing adequate drink stations and clear direction and distance markers all along the route. Furthermore, it is always extra special to be able to run in the heart of KL via Jalan Ampang, Jalan Sultan Ismail, Jalan Tun Razak, Jalan Tunku Abdul Rahman, and passing famous landmarks of KLCC, KL Tower, Pudu Raya and Bukit Bintang.

The real fun started when the runners crossed the Finish Line and joined-in the post-race after party. After having collected their colourful medals, we were given free ice-cream and free flow of isotonic drinks for starters.

The Finish Area resembled a page straight out of Marvel & DC Comics with many runners dressed as Batman, Catwoman, Captain America, Iron Man, Superman, Transformer Robots, Wonder Woman and other notable action heroes. The gleeful children were entertained by a giant bubble act, and by the presence of Mister Potato and Mamee Monster Mascots. There were food trucks which offered the hungry participants nasi lemak, sandwiches, and fruit juices. The shiny and happy crowd mingled, took snapshots at the photo booths, ate, drank, joined the Zumba dance, and celebrated an eventful Sunday morning. The last act were the presentations of hampers and prizes for the winners of lucky draw, best costumes and top 3 Finishers in each category.

Looking at all the smiling faces, I gave this event two thumbs up for brightening the lives of so many children, and allowing us all to feel like a hero if only for one day. 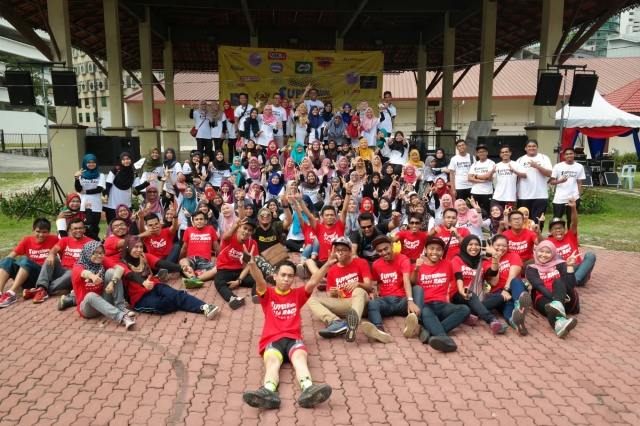 Hi:) My name is Gus and I am a Fitness Coach who enjoys outdoor adventures. In particular, I like to run marathons & ultra marathons, and compete in triathlons and century rides for fitness, fun & friendship. My passion is to motivate my friends to exercise more so that they can live life to the fullest. The purpose of this blog is five-fold:- 1) I find writing very therapeutic & beats paying for a psychiatrist to keep sane 2) I like to share & inspire others into engaging in any healthy pursuits 3) This is a great way to keep track of my progress in all my sporting endeavours 4) This also keeps me honest & spurs me on to do more 5) Even if you are a couch potatoe, I hope you will find my entries entertaining and/or informative. In summary, this blog is helping me help others help myself...get it?
View all posts by Gus Ghani →
This entry was posted in 15km, 2016, Costume, Couple Running, Event, Event Organiser, Fun Run, Happy Runner, Kuala Lumpur, Malaysia, May, Running and tagged 15km, 2016, costume run, Couple Running, happy runner, kuala lumpur, MATIC, May, NM Galaxy, Road Race, Running, Superheroes Race. Bookmark the permalink.