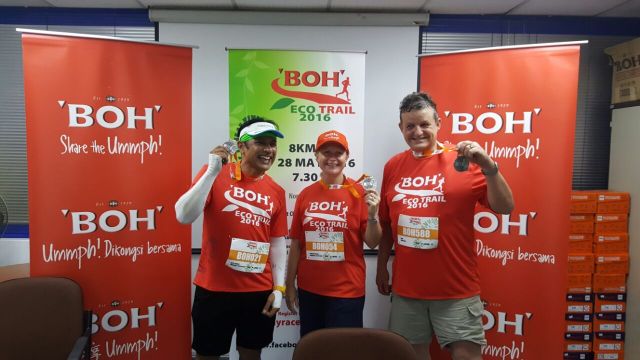 I was fortunate to be invited by BOH Tea Plantations to participate in their BOH Eco Trail Run which was hel
d in Bukit Cheeding, Selangor on the 28th May 2016.
Apart from being able to enjoy the fantastic setting of natural greenery with my running partner and wife, I was given the exclusive honour of interviewing the owner of BOH, Caroline Russell and their environmental partner Faizal Parish of Global Environment Centre.
To my utter delight, The Star newspaper was kind enough to publish my related article today which I hope will help create greater public awareness of the importance of protecting our peat forests and eco-system.

For my readers, I have added below the original uncut version of my story. The refined and edited version of the same story can be read in today’s The Star. Enjoy!

As both, a nature lover and an avid runner, I am always on the lookout for running events which are eco-friendly and help promote the protection and preservation of Mother Nature’s limited natural resources. In the past, I have supported the Save Our Rainforest Run (SORR) 2014 & 2016, and KL International Earth Day Run 2016. The former event is organised annually by non-profit organisation PEKA (Pertubuhan Pelindung Khazanah Alam) Malaysia, and it involves running in selected local Forest Reserves and planting 1,000 tree saplings by the participants. While, the latter yearly event is organised by Asia World Events Sdn Bhd, and it aims to promote sustainable development and highlight climate change issues. So, when I heard that the BOH Tea Plantations was organising an exclusive 8km trail run to raise awareness on the importance of peatland preservation and the prevention of peat swamp forest fires in the Kuala Langat North Forest Reserve (KLNFR) to help curb issues that contribute to haze conditions in the country, my wife Maryati and I signed up for it without any hesitation. Furthermore, we were really excited at the prospect of running within the BOH Tea Plantation in Bukit Cheeding, Selangor, as well as exploring part of the neighbouring KLNFR for the first time. 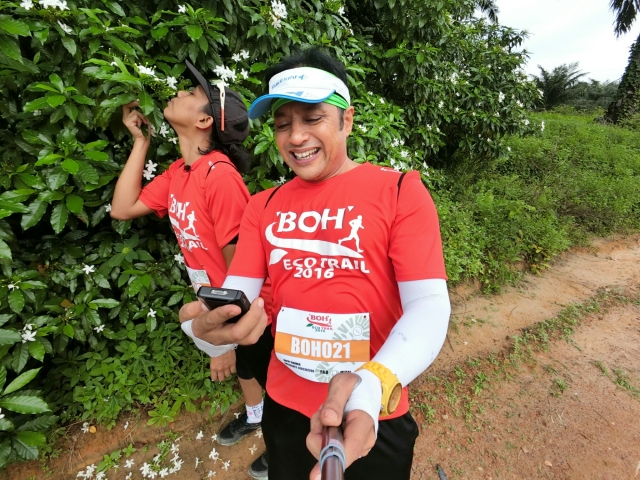 On race day, my wife and I left our home in Shah Alam at 5:30am under a shroud of darkness, and we drove towards Banting, buoyed by the anticipation of discovering a new place at our doorstep. Our morning journey got eerie, as soon as we turned off the main road at the Taman Sri Cheeding intersection and started driving on an unlit and isolated stretch which was flanked on both sides by spooky silhouettes of palm trees. The further we drove up this unfamiliar territory, the more nervous we became. Luckily, we were soon followed by other cars which were taking participants to the same event venue. My wife Maryati quipped, “this is like the blind leading the blind,” and before I could answer her, we spotted the familiar figures of RELA volunteers directing us to the entrance of the tea plantation.

The gathering area was adjacent to the factory entrance, and by 6:30am, many of the runners were already cheerfully mingling, drinking freeflow BOH tea, visiting the display booths of the event partners, namely, Selangor Forestry Department, Global Environment Centre (GEC) and Jabatan Kemajuan Orang Asli (JAKOA). At the booths, we could learn more about their respective activities. I was delighted to see a group of Orang Asli women weaving baskets and some of their men were dressed in their traditional native gear, at the forefront of this event because too often, the Orang Asli (OA) communities are questionably left-out of social events in their own locality.

Later on, BOH CEO Caroline Russell told me that the local OA community was very much involved in this project because they had helped clear and mark the jungle trail, and the local OA had just as much to gain from protecting the precious eco-system upon which they critically depend for their livelihood.

I spent some time at the GEC booth where Coordinator Raj Rengasamy patiently explained to me the importance of peatland as a vital store of natural water supply which stores water during rainy season and releases water back to the rivers during the dry spells. Unfortunately, due to the El Nino phenomenal and global warming, the balance of nature is upset, and during the exceptionally dry spell, it is very easy for the peatland to catch fire which in turn causes the dreaded haze. I guess it is easy for us to blame others for the haze crisis when we ourselves do not really understand the root of the problem. Lest, we forget the challenges faced by people like Caroline Russell, GEC Head Faizal Parish, Selangor Forestry Department, the BOMBA, the local Orang Asli, and the Cheeding villagers who are living and working near the danger zones. Thankfully, their community has banded together under the capable guidance of Global Environment Centre in order to provide an early warning system to monitor and control the threat of forest fire. However, even with a workable blueprint, the successful mitigation of forest fires will depend significantly on the understanding and actions of the general public, like you and me. As Caroline pointed-out, “We must educate people to stop throwing cigarette butts out of passing cars which can easily lead to a raging forest fire”.

During the official ceremonies before the flag-off, Caroline presented a mock cheque for RM28,000 to GEC Faizal which is all the proceeds collected from the 600 generous participants.

This much-needed fund will be utilised by GEC for practical purposes like field-monitoring and assessing the threats of forest fire via their ongoing Peatland Forest Ranger Programme, as well as, organising training camps, talks and exhibition in participating schools, including two Orang Asli schools with the aim to increase the awareness of peat swamp forest conservation among the younger generation.

After a brief warm-up and stretching routine, a siren sound at 7:30am signaled the start of the run, and the chirpy runners made their way along the spacious dirt track. The surrounding landscape of orderly rows of endless tea bushels, interspersed with tall palm trees and coconut trees were so immaculately arranged that it reminded me of a beautiful English garden minus the colourful flowers! The spectacular views were simply mesmerising, and it was the sort of peaceful oasis that makes you forget all your troubles, and it would make a perfect getaway for stressful city folks who needed time-off to relax and recuperate.

Many runners took this rare opportunity to capture the scenery on their mobile cameras. The plantation air was so fresh and clean that it reminded me how poor the air quality in the cities were in comparison.

Halfway through our trail run, in single file, we entered the hallowed grounds of the peatland in KLNFR. Although, the trail was short, just being there, I felt emotional thinking about how this precious peatland has been reduced to only 900 hectares from 30,000 hectares over the years due to forest fires and development. The resulting level of destruction to the life-giving flora and fauna was too much for me to fathom. “Are we doing too little too late?”, I wondered. Whatever, the case, we must stay strong and not lose hope because by default, our efforts today can make a difference to the helpless creatures and plants that inhabit the forest. By just participating in this event, I no longer felt like a useless bystander, but rather, I was actually doing something positive for our natural environment. 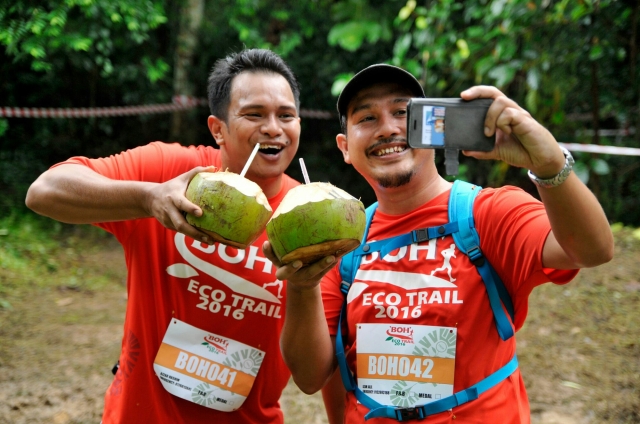 As soon as we exited the restricted area of the peat forest, there was a coconut station where we could quench our thirst with freshly cut coconuts grown on the estate itself which were aptly dubbed the “BOH-BOH NUT”.

When we reached the finish line, we were presented with a medal, and at the refreshment booth, we washed down the offered snacks of banana and sweet buns with a refreshing cup of BOH tea – what else!

The grand finale was an entertaining native dance performed by the Orang Asli dance troupe. It was a perfect way to cap, a perfect morning.

As I left the venue, I could not believe that I had witnessed and learned so much about our environment in such a short time, and it gave me more reason to love our beautiful country.

Last but certainly, not least, I must acknowledge and thank the following parties for such a rewarding experience;

Caroline & BOH Plantation for being the perfect host and allowing us to play in their perfect garden. For more information, visit http://www.boh.com.my

Faizal & Global Economic Centre for educating us on the importance of peat land preservation. For more information, visit http://www.gec.org.my

The Selangor Forestry Department for giving us special access to the Kuala Langat North Forest Reserve.

The Jabatan Kemajuan Orang Asli for sharing with us their enchanting dance routine and for displaying their lovely handicrafts.

The Marathon Company for their awesome technical support and helpful crew of volunteers.

The Star newspaper for having faith in me.

Check-out some of my cool action videos HERE!

Hi:) My name is Gus and I am a Fitness Coach who enjoys outdoor adventures. In particular, I like to run marathons & ultra marathons, and compete in triathlons and century rides for fitness, fun & friendship. My passion is to motivate my friends to exercise more so that they can live life to the fullest. The purpose of this blog is five-fold:- 1) I find writing very therapeutic & beats paying for a psychiatrist to keep sane 2) I like to share & inspire others into engaging in any healthy pursuits 3) This is a great way to keep track of my progress in all my sporting endeavours 4) This also keeps me honest & spurs me on to do more 5) Even if you are a couch potatoe, I hope you will find my entries entertaining and/or informative. In summary, this blog is helping me help others help myself...get it?
View all posts by Gus Ghani →
This entry was posted in 2016, 8km, Casio Exilim Malaysia, Couple Running, Cross-Country, Eco-Sports, Environment, Event, Event Organiser, Fun Run, Happy Runner, Interview, Malaysia, May, Media, Orang Asli, Press Interview, Running, Running Event, Selangor, Trail Run, Trail Running, Writing and tagged 2016, 8km, BOH, BOH Eco Trail Run, Bukit Cheeding, Casio Exilim Malaysia, Conservation, environment, Global Environment Centre, JAKOA, Kuala Langat North Forest Reserve, Media, Newspaper, Orang Asli, Peat Swamp, selangor, Selangor Forestry Department, Tea Plantation, The Marathon Company, The Star, Trail Run. Bookmark the permalink.