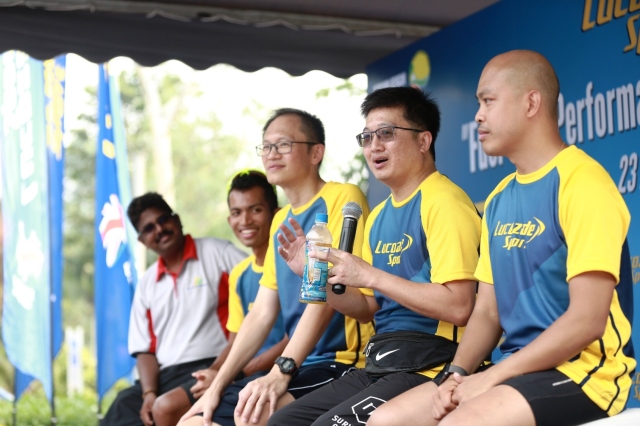 Personal Lucozade History: During my schooldays in United Kingdom, Lucozade was my favourite drink as an anytime pick-up drink and to quench my thirst during and after sports. At that time, there were no orange flavour, and there was only the original flavour which carried a unique taste, unlike any other sports drink.

30 Years Later: Naturally, I am pleasantly surprised that Lucozade Sports has finally made its way to our shores, be it, in its more palatable orange flavour. Perhaps, when Malaysians familiarise themselves with the brand, we will be able to enjoy the time-honoured Lucozade original flavour or other fruity flavour apart from orange.

Thirst-Quenching Aid: Indeed, Malaysian Athletes and Sportsmen will benefit from this introduction of a new quality source of Sports drink. With the boom in mass sporting events such as Cycling and Running, Lucozade Sport’s arrival is both timely and welcoming.

The Lucozade Sport™ ‘Fuel Your Performance’ Campaign got off to an energetic start recently at its first running clinic with Pacesetters Athletic Club, SMART Athletics Club and Tadonamo Triathletes. The exclusive event was the latest in a series of campaign activities designed to engage with Malaysian runners and an ongoing effort to bring its scientifically-proven formula to more than 1 million Malaysians through ground-level events and sponsorship of popular events such as the recent Reebok Spartan Race. Participants had the opportunity to learn from seasoned runner Edan Syah and exercise & sports nutritionist Dr Mahenderan Appukutty, Faculty of Sports Science and Recreation from Universiti Teknologi MARA who shared their experience on training and nutrition for sports enthusiasts. 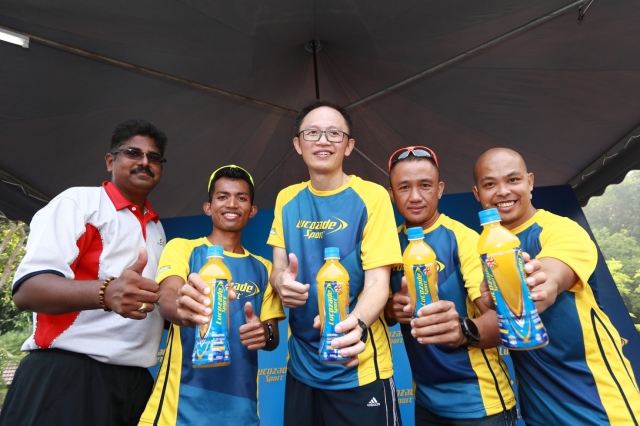 “Helping dedicated athletes to achieve their performance goals is an important brand value for Lucozade Sport™. By supporting accomplished athletes and inspiring others to achieve their own dreams, we are sharing resources, skills and knowledge that encourage Malaysians to lead more active lives,” said Lee Hon Tong, Regional General Manager, Suntory Beverage & Food Malaysia, Singapore & Hong Kong. “We embarked on this campaign to reach out to Malaysian citizen athletes from all walks of life and our ‘Fuel Your Performance’ Advocates are exceptional individuals who have accomplished many goals in addition to the demands of work and family. They serve as inspirational role models for aspiring runners to kick-start their own dream, because they are living proof that dreams can indeed become a reality.”

In addition to sharing his personal training strategy, Edan also said, “It has taken me eight years and nine marathons for me to realise my true potential as a runner – it’s a long process but I believe it’s never too late to start as long as you’re willing to train hard. By sharing my experiences and life lessons from being a ‘citizen runner’, I hope to inspire the younger generation and see Malaysian marathoners in the 2020 Olympics!”

As April is also celebrated as Nutrition Month Malaysia with the tagline ‘Eat Smart, Get Fit & Feel Great’, the clinic was also a fitting opportunity to stress the importance of eating right for energy and performance.

“High-performance athletes require a dietary plan that’s tailored to support and enhance their training. This includes consuming an appropriate amount of protein to help to build, maintain and repair muscle tissue. Hydration and energy are also essential factors for runners as stores of carbohydrates in the body get used up,” explained Dr Mahenderan as he provided structured guidelines designed to help participants fuel their runs with the right nutrition and hydration.

To maintain consistent energy levels, approximately 30-60g of carbohydrates are needed every hour – this would be equivalent to 1-2 bottles of Lucozade Sport™ for each hour of racing. Its science-based formulation of electrolytes and carbohydrates is specifically designed provide enhanced hydration to fuel athletes during prolonged exercise.

To attest to the importance of training, nutrition and hydration, the four ‘Fuel Your Performance’ Advocates are accomplished athletes who have achieved numerous accolades.  Their examples further advocate the importance of achieving one’s dream:

Edan Syah started running eight years ago. The self-coached runner qualified for the 119th Boston Marathon 2015 and finished with a time of 2:41:55, and became the fastest and the youngest Malaysian to have run the Boston Marathon! At the Tokyo Marathon 2016, he achieved a personal record of 2:38:55 and is now ranked as the fastest marathon runner in Malaysia for 2016. Edan aspires to be the youngest and fastest Malaysian to complete the 6 World Marathon Majors (WMM)  under 2hours 45minutes by 2018.
Mohd Amran bin Abdul Ghani has worked as a fire fighter since 2001. In 2014, this dedicated athlete came in first in the IRONMAN 70.3 at Putrajaya and again at IRONMAN Langkawi with a time of 10:15; at both races he was crowned Best Malaysian. This comes on the heels of his accomplishments in Powerman Malaysia where he came in first in his age category for 5 consecutive years, from 2009-2013. Amran’s dream is to race in international triathlons all over the world.
Mohamed Allie Helmy is a corporal in the Armed Forces who keeps fit because of passion, not only because of his line of work. He was the champion for the Port Dickson International Triathlon, Kedah International Duathlon 2015 and 113 Desaru Triathlon; and came in close as the second Malaysian in IRONMAN Langkawi 2015. Helmy aspires to race in the IRONMAN World Championships in Kona, Hawaii next year.
Alex Au-Yong wanted to channel his passion for long-distance running into something tangible for communities in need, so he created the XtraMile Run, Malaysia’s first-of-its-kind 100km charity run. The first event in 2011 raised RM111,000 for StART Academy, and the subsequent run in 2013 raised RM165,000 for the Dignity for Children Foundation. For 2016, his goal is to raise RM500,000 to ignite community involvement, provide education on holistic nutrition to children.

These Advocates embody what it means to reach for their dreams, and Lucozade Sport™ now invites other Malaysian runners to share their hopes and dreams as well via myLucozade@suntory.com.

A trusted brand since 1927, Lucozade Sport™ continues to hydrate and engage with Malaysian athletes at high-profile sporting events. Find out more about the ‘Fuel Your Performance’ campaign at http://www.lucozadesport.com  or http://www.youtube.com/lucozade.

About Lucozade™
The Lucozade™ brand was developed in 1927 by the chemist William Owen. Lucozade Sport™ was developed in the 1980’s. First launched in 1987, Lucozade Sport™ Orange is the No, 1 sports drink in the United Kingdom. Formulated based on scientific evidence, Lucozade Sport™ Orange is endorsed by sportsmen and global sports associations and a trusted sponsor for sports events around the world. Additionally, The Lucozade Sport Science Academy helped to further develop the area of sports nutrition, share expertise and help improve performance. This has enabled us to provide a performance edge to all sports and exercise participants, no matter what their level.

About Suntory Beverage & Food
Suntory Beverage & Food Ltd (SBF) is a leading global soft drink company, headquartered in Japan and listed on the Tokyo Stock Exchange, with an integrated platform across five key regions: Japan, Europe, Oceania Southeast Asia and the Americas. SBF has an extensive line-up of products and in 2012 was the number four supplier of soft drinks globally and second in Japan. SBF’s vision is to be the leading global soft drink company recognized for its premium and unique brands. On 31st December 2013, SBF acquired Ribena® and Lucozade™ and Suntory’s new Malaysian subsidiary commenced its sales and marketing operations in January 2015.

Hi:) My name is Gus and I am a Fitness Coach who enjoys outdoor adventures. In particular, I like to run marathons & ultra marathons, and compete in triathlons and century rides for fitness, fun & friendship. My passion is to motivate my friends to exercise more so that they can live life to the fullest. The purpose of this blog is five-fold:- 1) I find writing very therapeutic & beats paying for a psychiatrist to keep sane 2) I like to share & inspire others into engaging in any healthy pursuits 3) This is a great way to keep track of my progress in all my sporting endeavours 4) This also keeps me honest & spurs me on to do more 5) Even if you are a couch potatoe, I hope you will find my entries entertaining and/or informative. In summary, this blog is helping me help others help myself...get it?
View all posts by Gus Ghani →
This entry was posted in 2016, 21km, 42km, April, Event, Event Organiser, Full Marathon, Half Marathon, Happy Runner, Kedah, Langkawi, Marathon, Media, Running, Running Event and tagged 42km, Aseania Hotel, De'LIMA Langkawi Marathon 2016, Langkawi, New Event, Running. Bookmark the permalink.