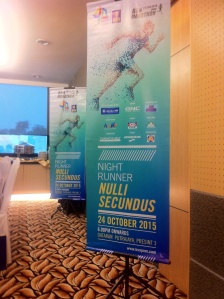 Press Conference
The PC was held at 2:30pm, 26th August at BSN HQ in Jalan Ampang. The Guest-Of-Honour was BSN Deputy Chief Executive, Mr. Siew Kin Meng, and the other guests included BSN staff, Race Director Mr. Niithi Seelan, Putrajaya Municipality Representatives, Director Generals from Hospital KL/Selayang/Sg.Buloh/Klang, the Sponsors, and the Media. As I walked into the meeting room, Niithi shouts, “Gus, can you write something nasty about that guy,” pointing to the familiar figure of Nick Arthur. I replied, “He (Nick) always writes about himself, and that’s the way it is!”. 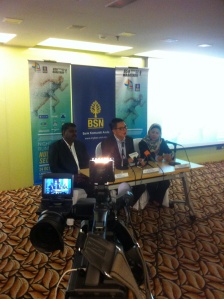 Siew explained that BSN became the Title Sponsor for BSNPNM in 2011, and the event has grown from 8,000 to 12,000 runners. Over the past 5 years, PNM has raised RM400,000 for several charities. In 2014, RM100,00 was collected through corporates and donated to the Persatuan Dyslexia Malaysia. This year, all of the donations collected will be distributed to 4 Government Hospitals – GH, Selayang, Sg. Buloh & Klang.
Mr. Siew unveiled the new PNM logo saying that the new one reflected the maturity, boldness and modern minimalistic of their showcase marathon.

Frankly, I find the new logo to be too simple and boring. I still prefer the old logo depicting the bridge which featured prominently in the 5km category.
Mr. Siew added that this year’s 5km category will be named the “5km Glow Run”, and each of its runner will receive a glow stick, glow glasses and glow shoe laces for the race. I can imagine how beautiful will be the sight of 2,500 glowing runners running across the 1km ornate bridge – cue legions of photographers. Siew joked, “If you cannot run 10km, run the 5km, and if like me, you cannot run 5km, then follow me because I know a short-cut!”. I never knew that bankers have a good sense of humour too?!

In Short, My Name Is Niithi
Race Director, Niithi presented to the audience the technical details of the night marathon. He said, “the Full Marathon course has less elevation than the Half Marathon. After 35km, we will have some entertainment to cheer-up the runners as that part of the route is quite boring”. Niithi further highlighted that there will be 22 ambulances present to reduce any emergency response time. In fact, looking at the full Medical Team (see below list), I can conclude that BSNNM 2015 will have the most comprehensive Medical Team to ratio of total participants:-

Show Me The Money
A grand total of RM79,000 cash awaits the Top Ten finishers from each of the 13 categories of 42km, 21km & 10km except the 10km Corporate Team who will earn cash prize for the Top 3 only. The two biggest cash prize of RM10,000 and RM7,000 will go to the winners of the Men & Women’s Marathon respectively. The difference in this prize money for Men & Women is due to the fact that the Men make-up for 60% of the Full Marathon participants which makes their category more competitive than the Women’s FM category. Niithi remarked, “In the near future, we expect equal participation from both Male & Female runners.”.
Since BSNNM is sanctioned by the World & Local Running Bodies, any running records broken during the race can be validated and recognised officially.

Remember The Blue Caps
Nick: “Last year, you gave-away blue caps to the FM & HM runners. Will you be doing the same this year?”
Niithi: “Only the FM runners will be given the caps because we want to reward the full marathoners more. However, we will be giving the half marathoners a special wrist band.”

What’s Left To Do
Everything is set, and I expect nothing else but a spectacular night marathon extravaganza come Saturday Night, 24th October 2015. The highly experienced and efficient race organisers, Twenty First Century Sports, never fail to raise the runners’s spirits and pump-up the runners at their showcase event. All hearts will be beating faster come 8pm, when the eager FM runners are officially released into the night. There will be 3 awesome bridge-crossings, and groups of rousing drummers along the route will be banging-away hard in order to spur-on the courageous night runners. Nulli Secundus.