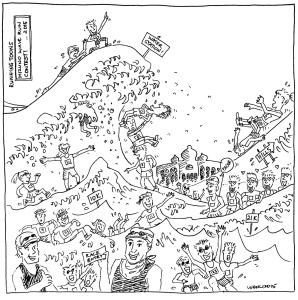 The 10th Wave
The Mizuno Wave Run (MWR) is back this year to celebrate its 10th Anniversary!
Since the inception of MWR in 2006, its sponsor the World Of Sports (WOS) Malaysia wanted to create a running event which is fun for the participants and at the same time, to guide new runners on proper training techniques, and on the use of correct running shoes and attire. As World Of Sports’s General Manager, Mr. Glenny recalls, “In the 3rd year, when we introduced Mizuno running vests as part of our race kit, many participants were questioning our decision to do so because there were some runners who were embarrassed to wear a vest instead of the usual T-shirts. However, we explained to them that runners should wear running vests because it is the most comfortable attire for running”.
Glenny continues, “This year to mark Mizuno Wave Run’s 10th Anniversary, we decided to add a new 21km category in order to give the 10km & 15km runners an opportunity to challenge themselves and conquer their first 21km on a beautiful Putrajaya route”.
Incidentally, this the 3rd consecutive year in which the MWR will be held in the municipality of Putrajaya. The first 3 years, it was held at Padang Merbok, and 4 years after that, in UPM, Serdang.

A Decade Of Running Tradition

There will be a running clinic conducted on 19th September at Dataran Kemerdekaan Shah Alam, Section 14 for registered runners. For those running their first 21km, it recommended that you join the Mizuno running clinic to pick-up some valuable running tips from Mizuno Official Ambassadors.

Don’t forget to use your discount vouchers!

PUTRAJAYA, MALAYSIA, 7th August, 2015 – Mizuno Wave Run, organized by W.O.S. World of Sports Malaysia and Mizuno is set to return with its 10th inaugural wave edition at Putrajaya on 27th September this year.
Since its inception in 2005, Mizuno Wave Run has been one of the most popular running events in the Klang Valley. This year, to commemorate its 10th wave edition, Mizuno Wave Run is set to deliver a new experience to the runners by introducing a new distance category, which is the 21km Half Marathon alongside with its popular 10km distance category.
“It’s been a great milestone for Mizuno Wave Run since its inception back in 2005. With only 900 odd runners back then, the event has gradually grown to be one of the most anticipated local running platforms amongst runners,” said Senior General Manager of W.O.S. World of Sports Malaysia, Ms. Carol Wong.
“Over the years, we have been receiving positive responses from our regular Mizuno runners and we are thrilled to be back again. This year, we are targeting 4,500 runners and we believe that with the introduction of the new distance category of 21km Half Marathon, we are able to deliver our best commitments to those who have been supporting us over the past 9 years”, Carol further commented.
Putrajaya is chosen again to host the Mizuno Wave Run 2015 due to its perfect landscape infrastructure. “Undeniably, a good location plays a major role in ensuring a comfortable running environment for runners. With the beautiful landscape, safety routes and ample parking space available, we are convinced that choosing Putrajaya as the event location will encourage and entice a promising number of runners this year”, said Senior Sales Manager of W.O.S. World of Sports Malaysia, Mr. Glenny J Da Costa.
Mizuno Wave Run 2015 offers a total of 8 categories for various age groups and winning prizes worth more than RM50, 000 are up for grabs for the Top 10 Finishers in both 21km and 10km distance categories. “We would like to thank our official sponsors; Nestle Fitness Cereal, Perskindol, Ebene and Gatsby for their continuous support in making Mizuno Wave Run a yearly success”, Glenny added.
Runners can register via myraceonline.com and the closing date for registration is on 13th September 2015 or when reaches 4, 500 participants (whichever comes first). Entry fees for 21km and 10km are RM70.00 and RM60.00 respectively, with a scheduled race kit collection on 25th – 26th September 2015 at World of Sports Paradigm Mall. Additionally, the flag-off time slots are 6.30am for all 21km Half Marathon categories and 6.45am for all the 10km categories.
Upon registration, participants are entitled to an exclusive Mizuno Wave Run 2015 Official Running Singlet. Additionally, all finishers will be rewarded with a Finisher Medal and endorsed E-Certification (printed finishing time and position to be downloaded from myraceonline.com).
In conjunction with Mizuno Wave Run, W.O.S. World of Sports Malaysia will be organizing Mizuno Running Clinic Sessions to train runners for the upcoming event. Scheduled to run on 22nd August and 19th September 2015 at Dataran Kemerdekaan Shah Alam, Section 14, lucky registered runners will get the chance to learn hands-on tips on different running elements and strategies from Mizuno Official Ambassadors.
Mizuno Wave Run registered runners will also get to enjoy exclusive discounts on selected Mizuno merchandise, alongside with various contest giveaways. For more information, log on to World of Sports Malaysia Facebook page for latest promotional updates.

IMPORTANT NOTICE
1. The author’s views expressed herein are personal, and they are accurate to the best of his knowledge unless otherwise implicitly stated.
2. Always read and understand fully all of the Event Terms & Conditions on the official event website BEFORE registering for any running events.

About The Author
Gus Ghani is an internationally certified Fitness Coach & a columnist for Cycling Evolution Magazine who loves to take-part in Endurance Sports. Gus is also the ambassador of ElliptiGO bicycles, 2XU Compression Wear, Newton & Innov-8 Running Shoes.
For more running news, follow
Happy Runner
LIKE RUNNING TOONS for the lighter side of Running.
#FreeRaceEntry
#RunningToonsContestNo.2
#Mizuno #MWR2015 # #running

Hi:) My name is Gus and I am a Fitness Coach who enjoys outdoor adventures. In particular, I like to run marathons & ultra marathons, and compete in triathlons and century rides for fitness, fun & friendship. My passion is to motivate my friends to exercise more so that they can live life to the fullest. The purpose of this blog is five-fold:- 1) I find writing very therapeutic & beats paying for a psychiatrist to keep sane 2) I like to share & inspire others into engaging in any healthy pursuits 3) This is a great way to keep track of my progress in all my sporting endeavours 4) This also keeps me honest & spurs me on to do more 5) Even if you are a couch potatoe, I hope you will find my entries entertaining and/or informative. In summary, this blog is helping me help others help myself...get it?
View all posts by Gus Ghani →
This entry was posted in 10km, 12km, 2015, 21km, Half Marathon, Happy Runner, Mizuno, MWR2015, Putrajaya, Road Race, Running, Running Event, Running Toons, September and tagged 10km, 2015, 21km, happy runner, mizuno, MWR10th, MWR2015, Putrajaya, Running Toons, September, World Of Sports. Bookmark the permalink.