A- Team Gathering
It was like any Friday night on 16 Jan 2015, except tonight a small group of men and women gathered in Shah Alam to jump-start an ambitious campaign, led by avid cyclist Dave Ern, to lobby for a bicycle lane along the 74km stretch of KESAS HIGHWAY from Bukit Jalil via Summit Subang Jaya to GM Klang.
Our gracious hosts for this kick-off meeting was no other than our legendary ex-national cyclist, Shaharudin Jaffar (also known as Shah by his friends) & his gracious wife, Hasmah Ibrahim.

In total 16 of us were present to offer any ideas, assistance or support for this KESAS
Highway endeavour. United by our mutual passion for cycling, I can say with reasonable certainty that all of us, present on that night, would like to do what we can inorder to promote more and safer cycling zones in Klang Valley. I have no doubt that it is a BIG ASK to expect the highway concessionaire involved (Gamuda) & the concerned local authorities of MPSJ, MBSA & MBPK to give-way to our demands without an epic struggle. In such a case, it is always easier to back-away from a huge obstacle than to try to overcome it. However, if we look at the success story of Penang’s Campaign For A Lane, we must learn to face the hard facts that all good things don’t come without years of hard work and struggle. If we, as cyclist, do not campaign for our own rights, then we should not expect non-cyclist do it on our behalf either. Moreover, given the undeniable surge in the popularity of cycling over the past two years, the timing to push forward our rights for a safer cycling haven is right now. After all, it may take some time in the future before we will see any fruits from our labour of today. So, the sooner, we plant the seeds for tomorrow, the sooner, we can see our pooled ideas and combined efforts develop into a reality.

Why Kesas Highway?
During our meeting, Dave declared that KESAS Highway was a suitable venue for a cycling lane for 4 main reasons:-
1) It is already a popular route among the cycling community and cyclists can be seen riding along it everyday, day or night.
2) There is a dedicated motorbike lane for most of its length.
3) It covers a looped distance of 74km or more which is part of its cycling attraction.
4) Since the infrastructure is already there, it would require considerably less funds to accommodate a bicycle lane than if the route had to be built from scratch. For example, the purpose-built 7km bike lane in Shah Alam costed approximately RM10 million to build. Unfortunately, its distance of only 7km is too short to attract the regular cyclists who are looking to spend a minimum of 90 minutes cycling in order to make their effort and journey worthwhile. 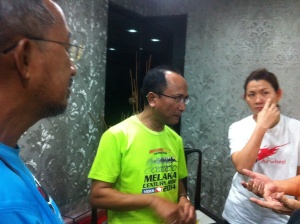 1. Appoint Committee Members & Designate Key Tasks.
Campaign Chairman – Shaharuddin Jaffar
Campaign Leader – Dave Ern
Event Co-ordinators – Kenny Lim & Vunton Yeok
Mapping Team Leader – David Chan
Promotions & Marketing – Abbey Yap
Education & Information Officer – Gus Ghani
These members were elected to their current positions because of their ability and willingness to spearhead the assigned tasks on a volunteer basis without expecting any financial rewards nor personal gains in return. Obviously, there will be many other members who will sacrifice their time to help in any related project tasks when the need arises.

2. Gather Support For Official FB page “Campaign For KESAS – Making Kesas A Cyclists’s Haven !”. In less than 2 weeks, a total of 1,700 Likes have already been recorded. Obviously, when we eventually submit the Working Paper to the Highway Concessionaire & affected Local Authorities, the bigger the support from the Public & Cyclists, the better will the proposed project be received.

The purpose of these road-mapping exercises is to physically identify all the dangerous obstructions (such as potholes, tree roots, oversized drain covers, highway debris), as well as, any serious safety concerns (such as faulty tunnel lighting, lack of signage, dangerous crossings, unlit zones) posed to cyclists along the 76km loop from Botanik Klang via Kota Kemuning & USJ to Bukit Jalil. 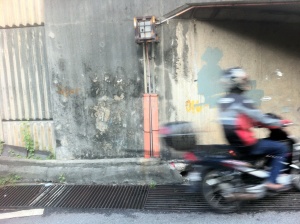 NATIONAL CAMPAIGN: This “Campaign For KESAS – Making Kesas A Cyclists’ Haven is not just for you & me living in Klang Valley. It is about making a national statement that we want a safer environment to cycle with our family and friends all over Malaysia.

WHAT IS IN IT FOR ME
How will cycling lanes in Penang or Selangor benefit the cyclists in Kedah or any other State?
Well, first and foremost, it will pave the way for other State Authorities and citizens to realise that campaigning for bicycle lanes is not an exercise in futility. On the contrary, every successful step taken to benefit a cyclists’ safety symbolises the lowering of society’s prejudices against cyclists, and hopefully, one day, the public’s indifferences will be replaced with tolerance, and eventually lead to empathy towards cyclists.

BUT I DON’T EVEN OWN A BIKE
Why should non-cyclists bother to support a cycling campaign?
That’s a good question! Cycling has always been part of our culture & history since our British colonial days. In the days of our forefathers, there were no school buses to pick them up or send them to school. Most children had to go to school by foot or by bicycle. In those days, you were considered a big-shot of the kampung if you owned a bicycle. Until today, rickshaws still provide a convenient mode of public transport in Malacca & Georgetown Penang. Although fading-out, there are still a few street vendors left,like the ice-cream, cendul, rojak or roti man, whose bicycles can be considered as the prototype of the meals-on-wheels vans that we see emerging on street corners today selling western food. How quickly times change, and how quickly we forget those things that served us well in the past. For the more nostalgic characters like myself, we still appreciate the handicrafts and traders of bygone days.

Even advanced countries and modern societies of Amsterdam, London, New York, and Paris have bicycle lanes. Perhaps, they see cycling as an efficient and cost-effective way to partly solve their traffic woes. Maybe, they see cyclists as an environment-friendly ally to preserve our natural and man made resources. In summary, apart from helping to ease traffic congestion in overcrowding cities, protect our environment & preserve our resources, cycling can benefit the whole community by offering its citizen a healthy activity.
So, who cares if you do not cycle, because as long as you are a member society, you will also benefit from the proliferation of a cycling culture in your neighbourhood & country.

HOW CAN YOU HELP?
Everyone’s help and support will be important to realise this Campaign For KESAS. Firstly, please Like our official FB page, https://www.facebook.com/events/370591493114495/
– it won’t cost you one cent to do so but your gains from it will be enormous, and not least, because you will have the gratitude of the cycling community. 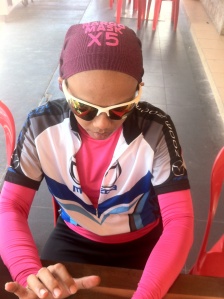 JOIN OUR UPCOMING EVENTS
We will be organising more events in the near future to promote awareness & support for Campaign For KESAS, and all the invitation details can be found on our FB page.

I would like to leave you with these lines which have been partially borrowed from John F. Kennedy – “Ask not what cycling can do for you, but rather, ask what YOU can do for cycling!”.

Hi:) My name is Gus and I am a Fitness Coach who enjoys outdoor adventures. In particular, I like to run marathons & ultra marathons, and compete in triathlons and century rides for fitness, fun & friendship. My passion is to motivate my friends to exercise more so that they can live life to the fullest. The purpose of this blog is five-fold:- 1) I find writing very therapeutic & beats paying for a psychiatrist to keep sane 2) I like to share & inspire others into engaging in any healthy pursuits 3) This is a great way to keep track of my progress in all my sporting endeavours 4) This also keeps me honest & spurs me on to do more 5) Even if you are a couch potatoe, I hope you will find my entries entertaining and/or informative. In summary, this blog is helping me help others help myself...get it?
View all posts by Gus Ghani →
This entry was posted in Uncategorized. Bookmark the permalink.