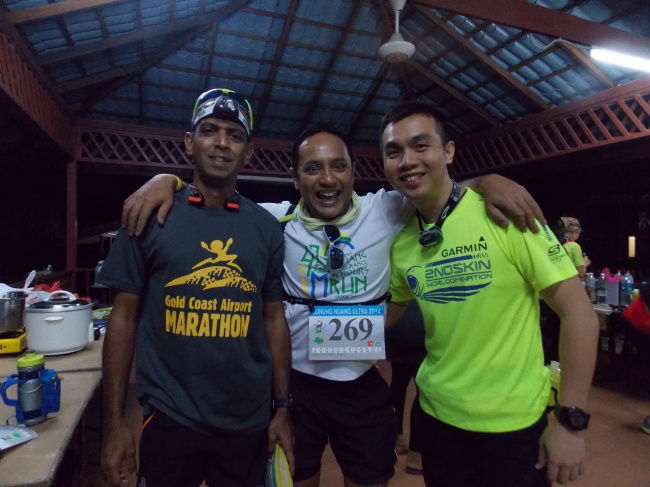 Gunung Nuang is located in the Hulu Langat greenbelt, and it boasts the HIGHEST peak in Selangor with an elevation of 1,493 metres (4,898 feet). Gunung Nuang is a popular route among local hikers and runners. Its close approximate to Kuala Lumpur makes it an ideal training ground for trail runners, as well as, for hikers who are preparing to climb Mount Kota Kinabalu and other challenging peaks.

The Gunung Nuang Ultra 12 hour Challenge (GNU) is the BRAINCHILD of avid ultra marathon runner, Mr Jeff Ooi. Jeff who recognised that there were only a few ultra marathon events being organised in Malaysia. So, Jeff started his first own GNU event in 2013 in order to encourage more local runners to take-up ultra marathon running. His first GNU in 2013 gave-out a trophy to participants who could successfully complete a minimum of 40km within a generous cut-off time of 12 hours. This year’s Gunung Nuang Ultra held on 2nd March was tougher because the participants needed to complete a minimum distance of 50km within the same cut-off time of 12 hours in order to take home a coveted trophy.

The race ROUTE is the same – to repeat a 10km loop which consisted of a 5km run up to Camp Lolo (elevation of 50m) and then, make a U-turn back down 5km to base camp.

By 6am on race day, a small band of about 300 participants gathered at the makeshift meeting point next to the entrance of Gunung Nuang Trail. There is a table set aside on which the participants could leave their water bottles labelled with their bib number. Before the start, event MC, Ms Julie Wong, briefed the runners on the race rules and guidelines. Julie is also known affectionately among her running friends as “The Headmistress” because of her direct and no-nonsense style when officiating running events. On that morning, when Julie announced that any runner caught littering the course would be penalised by having 10km deducted from their race log, none of the runners took Julie’s warnings lightly nor were they prepared to TEST her patience to see if she would be true to her words. Probably, a WISE decision on the part of the eager runners.

Ready or not, the runners were flagged-off at 6:30am. With only their headlamp to light the way, the runners entered the BOSOM of the dark jungle in a single file. The well-trodden trail was wide enough for the faster participants to overtake. Previous year, I had completed only 4 loops (40km) at GN2013, and this year, I started relatively in order to acclimatise to the surroundings and to warm-up the body and legs first. For the ascent stage, most runners walked briskly uphill at their own pace, with brief spurts of running wherever the trail’s elevation was less steep. With a decent pace, it takes a good solid hour to reach the 5km checkpoint. As you get closer to Camp Lolo checkpoint, you can hear the soothing sounds of the stream nearby and the air is cooling and is supercharged with nature’s negative ions. Race marker, Shirley is stationed at this U-turn point, and she patiently marks each runner’s bib to record the distance completed. There is ample water at this checkpoint for the runners to REFRESH themselves, before heading 5km back down to the starting point. The downhill portion of the route is where most runners will make-up for time lost during the slow uphill climbs, by bombing down fast. 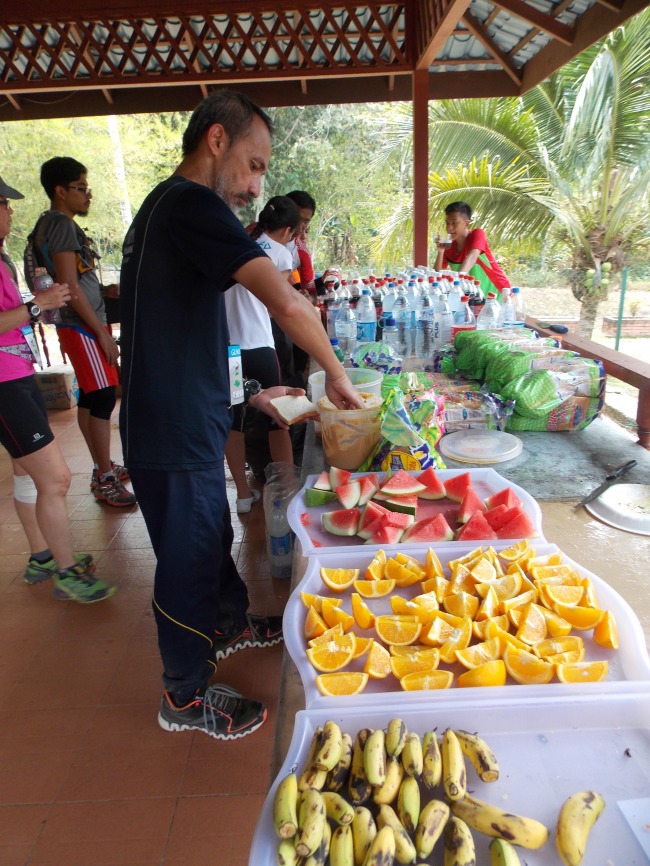 For me, running downhill is my favourite part of mountain trails because it really tests your running and BALANCING skills. You have to be very alert to your surroundings and you have to be always weary of your landing zone. The trick is to keep your eyes FOCUS on the ground and choose your pathway 5-6 steps ahead at a time. This requires full concentration and you can’t afford to switch your mind off, not for one second. For sure, a QUICK reflex and having CONFIDENCE on your abilities are also vital to run fast downhill without taking a spill. I remember at last year’s Gunung Nuang Ultra, I saw a Caucasian runner suffering from mild trauma after a fall. Although, her cuts were minor, I think the shock of losing one’s footing unexpectedly was what got to her most. In fact, only moments earlier, I had seen the same girl running confidently with her friends while busy chatting away. I suspect that she fell because she was not really concentrating on the terrain below her feet at the critical moment. Trail runs are EXHILIRATING but the dangers of running off-road cannot and should not be underestimated.

At the 20km – start of the 3rd loop – onwards, the stifling heat and the hard dirt and stony path started wearing-down the runners feet and their energy. Some participants were using walking sticks to ease the constant stress on the legs. At 30km onwards, the tropical heat and high humidity was getting really unbearable, and the light of hope of finishing 5 loops (50km) was diminishing with each step I took. Such times when the body is tiring, the mind’s defensive mechanism will naturally look for an exit out of this hell hole of pain. At this point, you need mental toughness more than anything else. To stand any chance of completing 50km before it finished me off, I had to conjure-up “happy thoughts” to divert attention away from the pain below the waist. As with any ultra marathon event, running for miles-on-end for eight hours and more can lead to boredom and lead to low morale. To occupy the mind and boost morale, ultra marathoners will play mind games or sing a tune. We’ll just about do anything to escape the boredom.

Besides the testy conditions, fair credit must be given to race director, Jeff, and his merry team for providing ample liquids and foodstuff at the base camp, but at the same time, they verbally prodded and cajoled those runners who were resting too long for their own good.

It was good to see supporters turning-up to offer morale support to the participants as they looped passed the Finish Line at the bottom of the hill.

The race officially ended 12 hours after it started. Finishers were all handed a trophy of a man running to mark their achievement. Gunung Nuang is such a majestically beautiful place, and for me, participating in this gruelling event is not only a way to test my physical and mental ENDURANCE, but it’s also my way of paying homage to Malaysia’s great tropical rainforest. We should never forget how lucky we are to have her. Last but certainly not least, I must thank my wife, Maryati for her valuable support. As Julie said, Maryati should get a special trophy for patiently waiting 12 hours for me to finish! 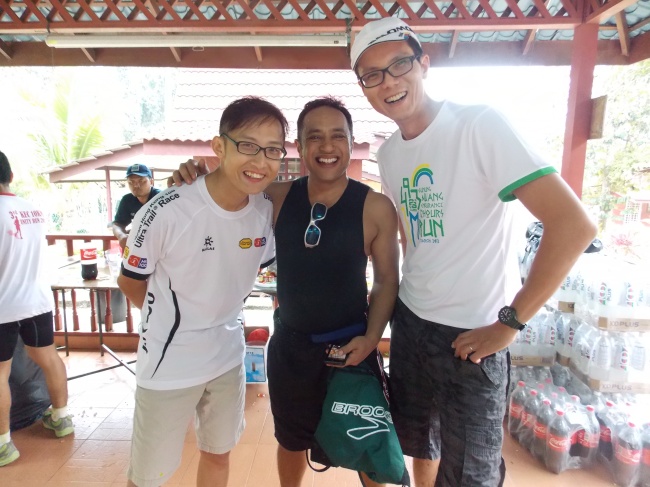 Hi:) My name is Gus and I am a Fitness Coach who enjoys outdoor adventures. In particular, I like to run marathons & ultra marathons, and compete in triathlons and century rides for fitness, fun & friendship. My passion is to motivate my friends to exercise more so that they can live life to the fullest. The purpose of this blog is five-fold:- 1) I find writing very therapeutic & beats paying for a psychiatrist to keep sane 2) I like to share & inspire others into engaging in any healthy pursuits 3) This is a great way to keep track of my progress in all my sporting endeavours 4) This also keeps me honest & spurs me on to do more 5) Even if you are a couch potatoe, I hope you will find my entries entertaining and/or informative. In summary, this blog is helping me help others help myself...get it?
View all posts by Gus Ghani →
This entry was posted in Elevation, Event, Gunung Nuang, Gunung Nuang Ultra, Gunung Nuang Ultra 2014, Happy Runner, Jungle, Malaysia, Running, Selangor, Trail Run, Trail Running, Ultra Marathon, Uncategorized and tagged 12 hours, Ascent, Descent, Gunung Nuang, Gunung Nuang Ultra 2014, selangor, Ultra marathon. Bookmark the permalink.