There are certain perks being a blogger, and none greater than being able to meet and interview gifted people who are highly effective and respected individuals  in their chosen field of influence. These Super Stars are at the top of their game, and by their actions alone, they can positively inspire the others around them to go that extra mile which could be the difference between joy and pain; winning and losing; success and failure. 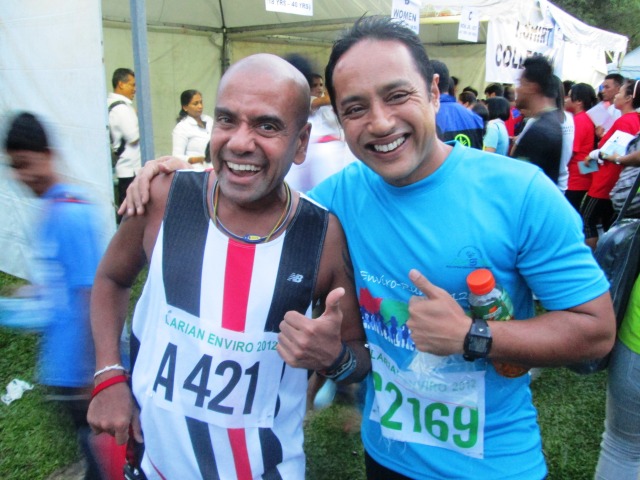 Personally, I have met the subject of my interview today, Mr. Mohan, on only two previous occasions . The first time was at the Orang Asli Trail Run in Bentong on April 2012, and the second was at the Enviro Run in Kuala Lumpur on October 2012. My first impression of Mohan was that he was larger than life, very noisy, and the life of the party in whichever event he participated . My second impression was that  he was a kind, compassionate and caring runner who just loves to share the joys of running with anyone who is willing to listen to him. Since, I am at the infancy stage of my marathon journey, there were many questions about his life as a avid marathonerwhich I wanted to ask. So, without further a due, I fondly present to you my “10 minutes with Mohan” interview…

1. What made you start running marathons?

Back in 1993, I “attempted” my first marathon in Singapore, it was called the “Mobil Singapore Marathon”….

This was after a few years of “preparing for it”… rewind…rewind… I failed my medical in 1988…. Had to make some drastic changes to my lifestyle!

Well, I did not complete the race, stopped after about 18 km….. sigh….

Completed my first full marathon at the 1995 Mobil Singapore Marathon.

I called the Singapore Amateur Athletics Assn the next day & told them that one marathon a year is just too few…. & was told that the human body cannot take more than 2 marathons a year.

3. At what point did you realise that you wanted to run so many marathons & why?

I had only run 5 marathons….

4. Do have particular marathon goals -l before, now & in the future?

Goals?? The problem is … the goal post is always moving….

5. What was you worse marathon experience?

Maybe, ( just maybe as I don’t complain about marathons ) is Hangzhao 2009, when they ran out of water. I bought afew cartons of bottled water & distributed to the other runners.

6. What was your best marathon moment ever?

7. Since you’re famous among the running community, what’s the one thing which the public expect from you which annoys you?

I am not ‘famous’ – just ‘noisy’. I guess if I am ‘quiet’, the community may be disappointed… pweet

8. How do you spend your marathon-free time?

Another important aspect of training … ‘makanathon’ – I love eating… does it show??

9. Tell us one thing about yourself which nobody knows, not even your friends?

10 If you celebrated Xmas, what would ask Santa for?

Probably to let the community grow and enjoy the sport, not necessarily to be competitive, but to appreciate the journey from 0 to 42….

And of course, for Santa to run a marathon as well.

11. What advise would you give to runners who are planning to run their 1st FM?

Forget about timing… whatever time it takes, it will be a PB !

12. What’s the one item which you can’t do without when you run a marathon?

13. The obvious question, how many marathons have you completed?

My count as at yesterday is 178 ( includes both, marathons & ultras ).

14. What would make you quit running marathons?

15. How would you compare Spore runners & events compared with their Malaysian counterparts?

Frankly, the Malaysians have a very simple attitude towards running – something I admire. ‘You guys are back to basics –  no frills runners’ – fantastic!

16. One day when you hang-up your running shoes/vibrams, how would you like people to remember you?

Haha, I think there is nothing to remember… this is reality, this is the real world!

Frankly, I don’t know….. I still have my first pair of VFFs.  I reckon that I have about 6 pairs of used VFF & afew brand new ones…. And a few pairs of shoes.

There you have it…wasn’t it a riveting & revealing interview! Of course, you may have some burning questions of your own for Mohan. Then why don’t you email me your question to me at gusghani@gmail.com and I will relay it to the man, himself. Similarly if you want to share your personal anecdotes about Mohan, or maybe, you just want to wish Mohan good luck, please drop me a line, and I’ll compile your messages and comments for Mohan.

In conclusion, I found Mohan to be a sincere, warm-hearted and humorous individual who is living life to it’s fullest, and the marathons just happen to be the stage on which he has chosen to perform, entertain, motivate and inspire his friends and other runners. May Mohan’s successful reign as the King of Marathons continue long into the future.

If you want to keep track of my daily activities and thoughts, please check my Happy Runner FB page. See you there 🙂

Hi:) My name is Gus and I am a Fitness Coach who enjoys outdoor adventures. In particular, I like to run marathons & ultra marathons, and compete in triathlons and century rides for fitness, fun & friendship. My passion is to motivate my friends to exercise more so that they can live life to the fullest. The purpose of this blog is five-fold:- 1) I find writing very therapeutic & beats paying for a psychiatrist to keep sane 2) I like to share & inspire others into engaging in any healthy pursuits 3) This is a great way to keep track of my progress in all my sporting endeavours 4) This also keeps me honest & spurs me on to do more 5) Even if you are a couch potatoe, I hope you will find my entries entertaining and/or informative. In summary, this blog is helping me help others help myself...get it?
View all posts by Gus Ghani →
This entry was posted in Community, Happy Running, Interview, Running, Sports, Trail Run and tagged camera, community, drastic, entertain, humorous, inspire, Interview, lifestyle, Malaysia, Marathon, Mohan, Singapore, timing, Ultra marathon, Whistle. Bookmark the permalink.