In 2011, I promised myself that I would register for both River Jungle Marathon & Adidas King of the Road (AKOTR) for the first time in 2012. Fast forward to 2012, and I find both events had clashed on the same auspicious day of 09-09-2012. Eventually, I decided to pick KOTR because of the following reasons:- (1) To accompany my girlfriend on her first KOTR (2) I was paranoid that one day, they would change the venue, and I wouldn’t get another chance to run along the North Pantai Expressway (NPE) (3) I wasn’t prepared for a Full Marathon, and I promise myself that I would be better prepared for RJM in 2013. 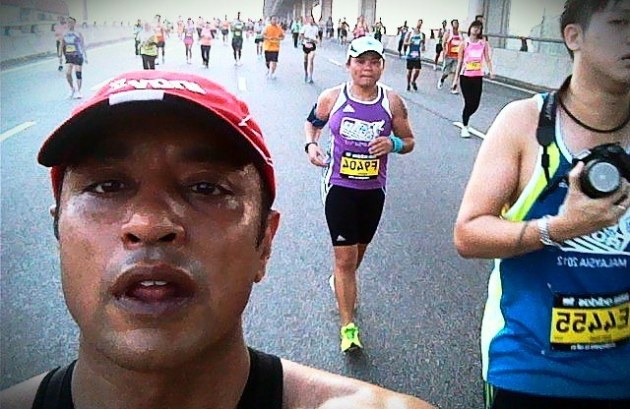 Not taking anything away from the rave reviews of RJM, I can safely say that King of the Road exceeded my highest expectations: I would even be so bold as to say – KOTR was the BEST RACE I have ever had the good fortune to join since I started running in June 2011 or 24 events earlier. Now, let me breakdown the reasons why KOTR ticks all my RUN HAPPY boxes.

THE VENUE: There is no better feeling than running along a normally busy expressway form toll-to-toll which has been closed totally to all vehicles from 3am to 11am on that Sunday, The road surface was smooth, and the route relatively straight with a few steep and gradual inclinations to spice things up. Apparently, on last year’s 16.8km course, the runners started running in the opposite direction towards Kewajipan roundabout to complete a U-turn which had caused a bottle-neck, This year, the run started differently in the direction of the first underpass in the direction of the first toll booth. For me, there was the added bonus that the race venue was a 5 minutes drive from my home. 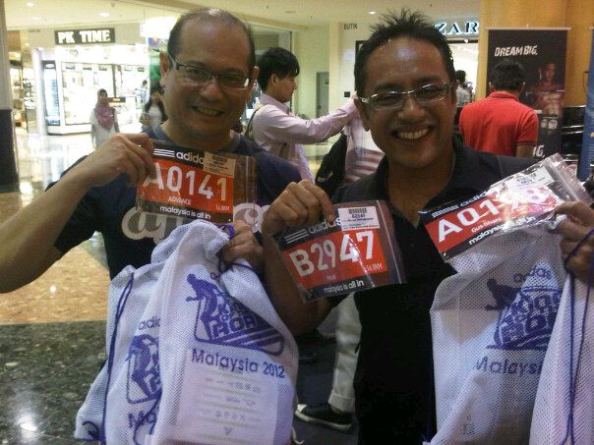 PRE-RACE ORGANIZATION: There was ample time, 3 weeks, before all 10,000 slots were taken with a split of 5,800 runners entering for the 16.8km category and 4,200 for the 10km fun run. There was plenty of time allocated for race kit collection, 3 days, from Thursday to Saturday, 11am to 8pm. Furthermore, the collection counter was well-organised and adequately manned with smooth distribution of kits. One small complaint was that some participant were not aware that they should have collected the free Powerbar and Adidas deodorant at a separate booth within the near vicinity of the collection counter of Sunway Pyramid Shopping Mall’s spacious central concourse.

RACE DAY ORGANISATION: The luggage storage counter was again big and well-manned, At the same time, the runners were shepherded to the pen without much fuss. There was a young 10-member drum troupe who entertained us at the start line with some cool beats just before the start, One small complaint is that the starting time should have been earlier than the scheduled 6:45am to beat the rising heat. Even then, the starting gun was delayed by a few minutes. The well-stocked drink stations every 3km and many distance & route markers made the run comfortable. Once we crossed the finishing line, we were quickly hydrated with water and 100plus, given our smart-looking medals (given to all finishers), and we were grateful to receive bananas too.

RUNNER’S SAFETY: It seemed that the organisers took every possible caution to ensure the safety of the runners from start to finish. We always expect the organisers to look after our safety, but we rarely give a second thought on how much preparation, hard-work and monumental effort has been put into the event behind-the-scenes. Let me take this opportunity to thank all of parties involved including the organisers, sponsors, medics, policemen, local council, the NPE concessionaire, and the hundreds of dedicated volunteers for putting together a magnificent KOTR event like no other – BRAVO!!!

VOLUNTEERS & MARSHALS: From what I witnessed and from the volunteers & marshals with which I came into contact during the entire event, let me tell you that they were all superb, so friendly and helpful, My favourite moment was watching the volunteers cheer-on the last remaining runners walking to the finishing line. The last runners had received the same level of enthusiastic applause and cheering as the podium finishers. It was a truly amazing sight. Well done, boys & girls !!!

THE SAFETY BUS: For the safety of the slow runners, the sweeper bus picked-up the runners who were not going to make the finish line before the deadline. They did not allow such late runners the choice to continue running because it would be too risky. The late runners were dropped-off 1km from the finish line to run or walk the rest of the way, and collect their medals too. As a result, nobody went home empty-handed or disappointed.

GO GREEN: Since I am always complaining about the ugly sight of white plastic cups lettering the areas around the drink stations, I was very glad to see that there were boxes with the words “REUSE REDUCE RECYCLE” strategically placed next to all the drink stations for runners to throw-away their empty plastic cups into.

GOOD WEATHER: We were very lucky that the blue sky that beautiful morning was clear, and the air was clean & crisp.

THE ICING: Another one of my favourite part was watching the colourful mass of runners wearing their attractive bright orange, blue, yellow, pink, purple & green running vests moving in unison along the NPE. From the sky high above us, the otherwise mundane gray expressway must have looked like a beautiful, moving flower bed of roses, lilacs, lilies, tulips, and chrysanthemums.

All the stars & planets had lined-up very nicely to make that auspicious event a truly memorable day for me, and this is how I want to always remember, Adidas King of the Road.

You can also follow my daily updates on my Happy Runner FB page powered by BROOKS MALAYSIA.

Hi:) My name is Gus and I am a Fitness Coach who enjoys outdoor adventures. In particular, I like to run marathons & ultra marathons, and compete in triathlons and century rides for fitness, fun & friendship. My passion is to motivate my friends to exercise more so that they can live life to the fullest. The purpose of this blog is five-fold:- 1) I find writing very therapeutic & beats paying for a psychiatrist to keep sane 2) I like to share & inspire others into engaging in any healthy pursuits 3) This is a great way to keep track of my progress in all my sporting endeavours 4) This also keeps me honest & spurs me on to do more 5) Even if you are a couch potatoe, I hope you will find my entries entertaining and/or informative. In summary, this blog is helping me help others help myself...get it?
View all posts by Gus Ghani →
This entry was posted in Brooks, Footwear, Go Green, Happy Running, Running and tagged 10km, 16.8km, 2011, 2012, ADIDAS, bananas, brooks, Brooks Malaysia, cheer, collection, favourite, flower, happy runner, marshals, morning, north pantai expressway, npe, organisation, powerbar, Race, race kit, recycle, reduce, reuse, run happy, safety, Sky, Sunway, sweeper bus, toll, vests, volunteers, water stations, weather. Bookmark the permalink.