In the wee hours of the morning on the 11th of March 2012, I rolled-out my trusted road racer and headed into the twilight. At 4am on this Sunday morning, the traffic was clear except for the odd vehicle carrying late-night revelers home or early shift-workers to work. I rode along the Kesas Highway, hugging the emergency lane all the way to the Exit for Bukit Jalil National Stadium.

It took me a good 50 minutes to travel the 18km distance. Around 5am, the stadium’s car park entrance was busy with long queues of cars filled with avid runners and lining-up to enter the venue.

As I chained my bike against a lamp-post, I was greeted by fellow marathoner, Yimei, and her husband for the first time. They were both surprised to learn that I had ridden there from Subang Jaya. Acting cool, I told them it was just a warm-up for the pending Half Marathon. As I was changing to my running vests, I received calls from Duan & Cikgu Syed

who wanted to collect their 21km running bibs from me. Before that, I was handing over a couple of mascot bears to Aeda who had ordered them earlier. 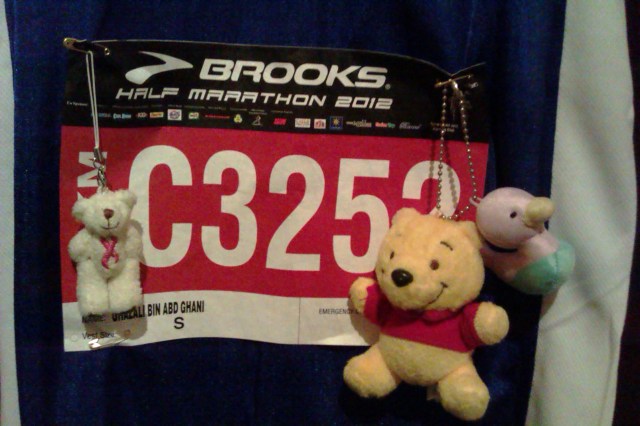 After a few more frantic calls, I met up with Duan (for the first time) & Cikgu Syed in front of the Brooks stall to their great relief. We were soon joined by Maryati & Atin who were running 10km. 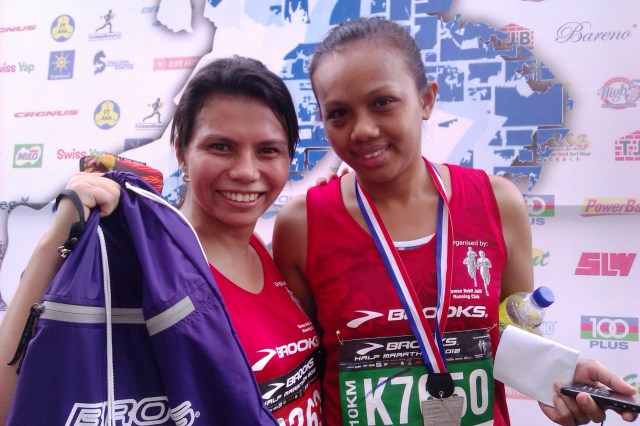 As we entered the stadium stands, the sight of 6,800 eager runners was inspiring.  The starting was already overflowing with the 21km runners.  The flag-off was delayed a few minutes as there were still many runners making their way from the stands to the starting pen at track side. 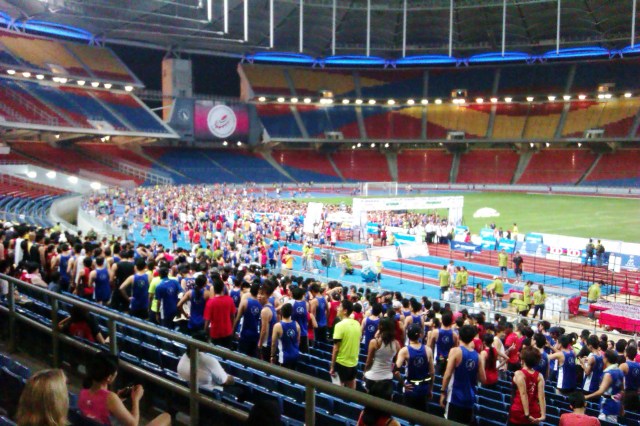 For easy reading, I have listed below the high-points, as well as, the low-points of this grand affair.

Let’s start with my list of the event’s  low-points:-

Despite my above complaints, there were many positives vibes and memorable moments which I will cherish as listed below as my high-points:-

Overall, my poor performance on race day has made me realized that I need to train harder and smarter if I am going to improve my time for Half Marathons. It’s back to the drawing board for me. I will need to pull my socks up if I am to face the greater challenge of my first triathlon – gulp!

Hi:) My name is Gus and I am a Fitness Coach who enjoys outdoor adventures. In particular, I like to run marathons & ultra marathons, and compete in triathlons and century rides for fitness, fun & friendship. My passion is to motivate my friends to exercise more so that they can live life to the fullest. The purpose of this blog is five-fold:- 1) I find writing very therapeutic & beats paying for a psychiatrist to keep sane 2) I like to share & inspire others into engaging in any healthy pursuits 3) This is a great way to keep track of my progress in all my sporting endeavours 4) This also keeps me honest & spurs me on to do more 5) Even if you are a couch potatoe, I hope you will find my entries entertaining and/or informative. In summary, this blog is helping me help others help myself...get it?
View all posts by Gus Ghani →
This entry was posted in Running, Sports and tagged 21km. 10km, barefoot, bear, bibs, bike, breast cancer, brooks, bukit jala, duothlon, friends, half marathon, high points, kesas highway, low points, motorists, national stadium, organisers, permit, pocky, police, ride, road racer, Running, safety, starting pen, twilight, winnie. Bookmark the permalink.