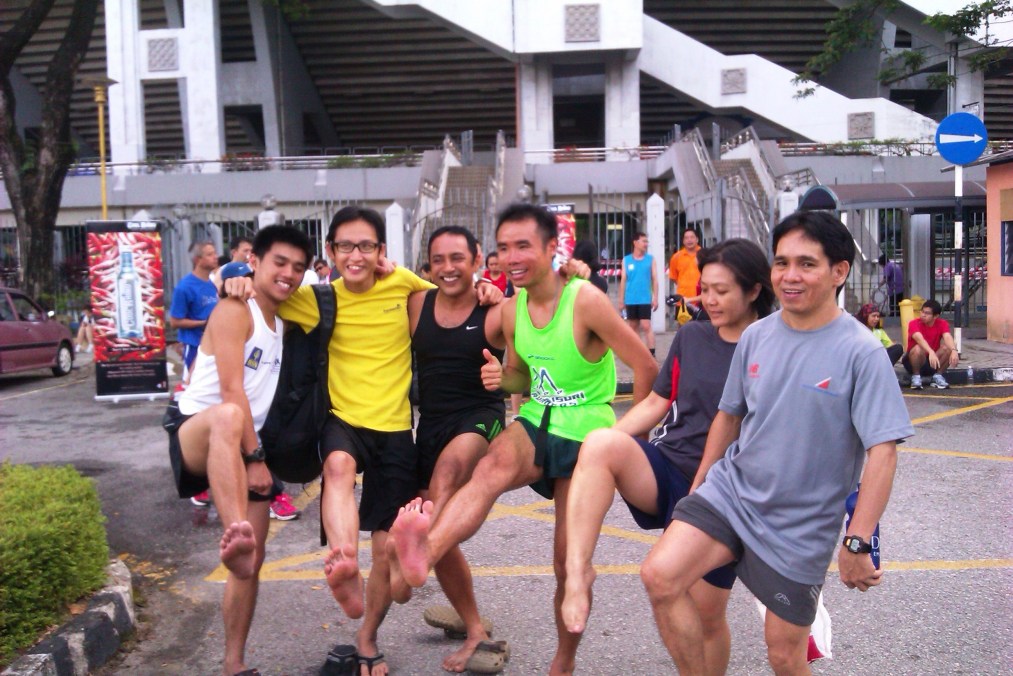 This particular Sunday was going to be a physically taxing one as I had planned a friendly futsal game with some friends, almost immediately after a scheduled morning run of 21 km.

The run was organised by Brooks so that runners could familiarize with the course of the official Brooks Run 2012 to be held on 11th March 2012. It was also a great opportunity for runners to train along the 10km or 21km routes with the presence of marshals and drink stations. Even pacesetters were provided to the appreciation of the gathering crowd of approximately 200-300 runners at car park C of Bukit Jalil National Stadium.

Soon after 5:30am, in the final clutches of darkness, we started our run; leaving the iconic stadium behind us as we made our way to Kuchai Lama via Astro HQ. To be honest, I don’t remember too well the directions of our route as I was more occupied chatting with my buddy, Cliff, and greeting friends who I had recognised on the run. I lost my 2 hour/21km pacer at our first drink station at the 5-6km mark.

I was very sluggish from the start until the 9.5km mark (verified by my friend, Jimmy’s GPS watch). Spurred on by the gung-ho demonstrated by barefooters, sifu Tan, Jason & Kent, I decided to remove my socks & shoes, and continued running barefoot. With shoes in one hand and a water-bottle in the other, I picked up my pace for the next couple of kilometres. Unfortunately, there were 3-4 construction sites later along the route and the roads were mainly jagged, uneven and littered with debris and stones. To make matters worse, the passing pavements, grass patches & road dividers were equally unfriendly. At certain points, I had to walk gingerly on the coarse course, which meant I was being overtaken by a lot of runners. However, to my credit, despite the continuous feeling of sharp pain on my bare soles, I resisted the temptation to put my shoes back on.

The “witching hour” for barefoot runners is that space of time when the street lights automatically switches off until the break of first daylight. During this time, I was treading blindly on the dark ground, and hoping that I do not step on any extremely sharp, unseen objects. Luckily, I did not suffer any serious cuts. Ironically, during this witching hour, I heard a runner moaned loudly about 20 yards in the dark behind me. When I turned my head back briefly, I saw a few runners surrounding a fallen runner. My gut instinct was to go back to help, and I would have done so if I had not seen any other persons around helping the poor runner. In this case, there were at least 6 people giving the fallen comrade some assistance. As I continued my run, I was hoping that the injury he suffered was not a bad one. 20 minutes later, a motorbike passed by me with a pillion passenger riding side-saddle. It was the guy who had fallen earlier and he looked alright except for his knee which looked raw and reddish from the fall.

As I entered the stadium’s car park gates, I could see a big group of runners posing for a group photograph. The photographer was telling them to bunch together more so that everyone could be in the frame shot. I ran straight to them, and parked myself in front of the group right at the moment the photographer shouted, “Malaysia”, and we shouted back, “Boleh”. Smile. Click. 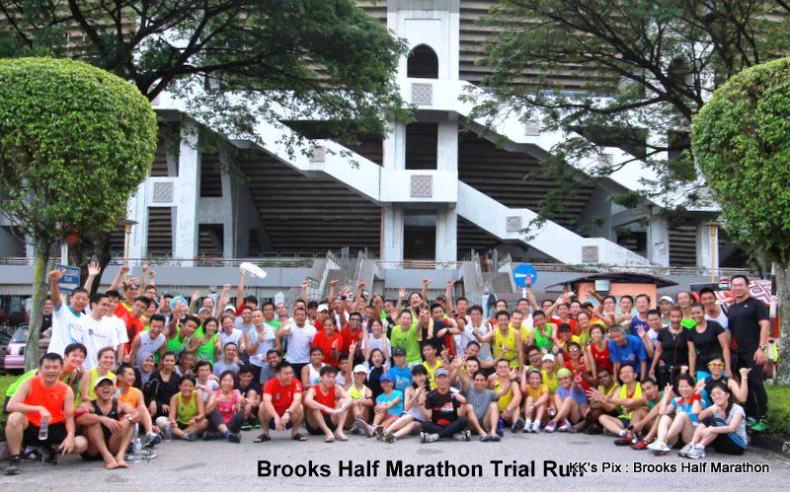 Feeling really famished, I wolfed down my Bovril & peanut butter sandwich without much delay. Then, I spent a few minutes catching-up with some friends and comparing notes before driving off back to Subang Jaya for my prearranged futsal game.

Nestled in the Subang Jaya Light Industrial area, my friend, Marc’s new futsal centre is called Ex8cize. It is situated in a brand new building which also houses a multipurpose hall, a book shop, and a salon. The two futsal courts were new, and its heated showers made it a very attractive venue. Out of the 10 Facebook friends who confirmed their attendance online, only 7 of us showed up. We played 3-a-side with one substitute for one full hour. The game was fast and furious, and it was a fun workout. At the end, we all agreed to meet-up again soon and play another round. Only the next time, we will invite another team to join us and have a proper 5-a-side match.

As soon as I reached home, I soaked my aching feet in hot water. After such a demanding & rewarding day, there was only one thing left to do……..rehydrate, refuel, 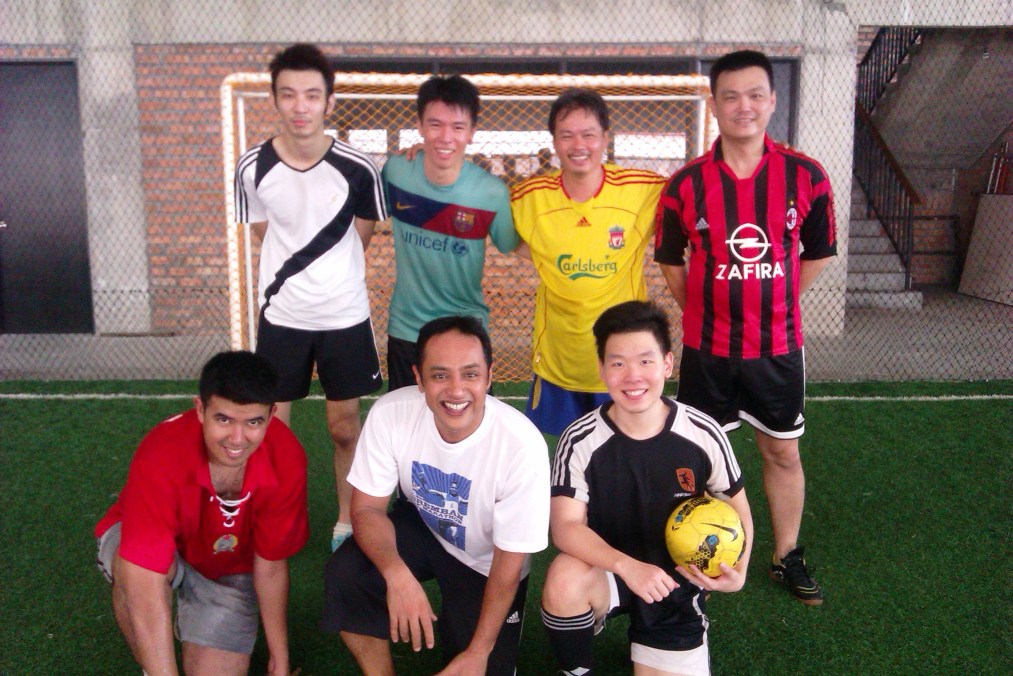 Hi:) My name is Gus and I am a Fitness Coach who enjoys outdoor adventures. In particular, I like to run marathons & ultra marathons, and compete in triathlons and century rides for fitness, fun & friendship. My passion is to motivate my friends to exercise more so that they can live life to the fullest. The purpose of this blog is five-fold:- 1) I find writing very therapeutic & beats paying for a psychiatrist to keep sane 2) I like to share & inspire others into engaging in any healthy pursuits 3) This is a great way to keep track of my progress in all my sporting endeavours 4) This also keeps me honest & spurs me on to do more 5) Even if you are a couch potatoe, I hope you will find my entries entertaining and/or informative. In summary, this blog is helping me help others help myself...get it?
View all posts by Gus Ghani →
This entry was posted in Uncategorized and tagged barefoot, bovril, brooks, bukit jalil, debris, ex8cize, fall, familiarisation run, friends, futsal, gut feeling, morining, peanut butter, recover, refule, rehydrate, rest, roads, Running, Shoes, stones, subang jaya, sunday, witching hour. Bookmark the permalink.

4 Responses to Tale of Two Runs & A Futsal Game